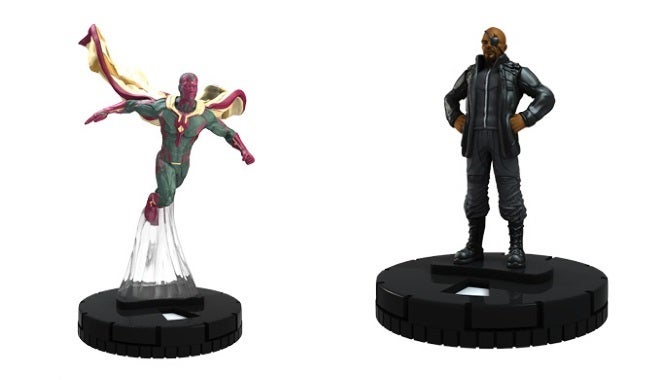 Hitting store shelves just one month before the release of the film itself is the Marvel HeroClix Avengers: Age of Ultron movie set. And, if you can't wait to see what the set has in store, WizKids Games has provided ComicBook.com with two exclusive previews from the set: Vision and Nick Fury!

The Vision HeroClix figure gives us one of our best looks yet at the mysterious new Avenger's appearance in Avengers: Age of Ultron, seen here flying into the air with a gold and red cape flowing behind him. As a figure, he comes in at 100 points with the wing and indomitable symbols on his base. His dial has no special powers, but alternates between phasing/teleport and plasticity, making him hard to pin down, super senses and invincible, making him hard to take out, and outwit and perplex, meaning he always has a useful support power to contribute to the team. He also has the Avengers and robot keywords.

Nick Fury comes out of hiding as a 45 point piece. He only has the Avengers keyword (he's no longer associated with S.H.I.E.L.D. in the Marvel Cinematic Unvierse) and he has a trait that says if he's the lowest point character on an Avengers themed team he can use leadership and outwit, and when he uses leadership he's considered to be 300 points. On top of that he's sporting stealth, sidestep, shape change, willpower and combat reflexes, plus the Avengers Initiative team ability.

Fury also has an interesting special power on each of his four clicks. It's called "I Recognize the Council Has Made a Decision…" and says that when an opponent makes a choice from an Avengers Assemble! trait, you may roll a d6. On a result of 5 or 6, change the effect to the other option.

The 6 Avengers in the Gravity Feed set (Captain America, Thor, Iron Man, Hulk, Black Widow and Hawkeye) each have a trait called "Avengers Assemble!."  This trait triggers whenever one of those Avengers characters make a successful attack and forces their opponent to make a decision between two game effects— both of which benefit the Avengers character (and therefore are bad for the opponent who was hit with the attack).  Nick Fury's Special Power "I Recognize the Council Has Made a Decision" ties in with these "Avengers Assemble" traits.  When your opponent makes their decision and you would prefer they chose the other option, you can roll a d6 and— on a result of a 5 or 6— change the option.

You can check out Vision and Nick Fury's full cards and dials in the gallery below, along with the previews of the six core Avengers – Captain America, Thor, Iron Man Mk. 43, Black Widow, Hawkeye, and Hulk – included in the Marvel HeroClix Avengers: Age of Ultron starter set, revealed previously on HeroClix.com.