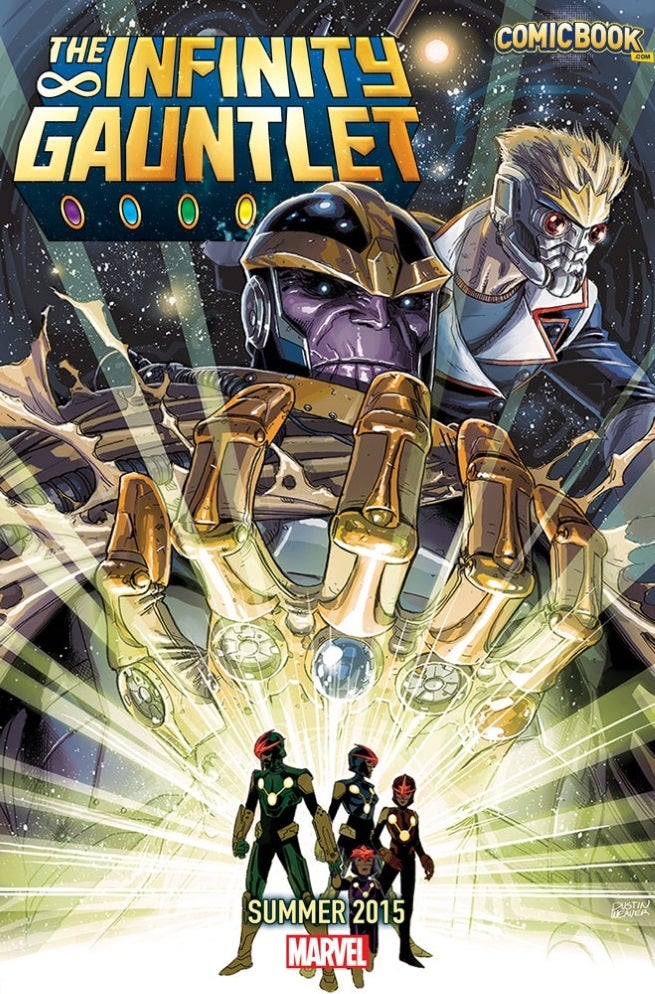 For more than a week, Marvel Comics has been teasing a return to some of its biggest events in the summer of 2015. Now, Marvel has provided ComicBook.com with an exclusive teaser for a return to what many consider to be their biggest event of all, The Infinity Gauntlet.

Originally published in 1991, written by Jim Starlin and drawn by George Perez and Ron Lim, The Infinity Gauntlet was the 6-issue miniseries that saw The Mad Titan, Thanos, finally achieve his goal of collecting all six Infinity Gems and placing them in the his gauntlet, granting him power above that of even the gods.

In an effort to court Death – literally – Thanos immediately wiped out half of life in the universe. The heroes of earth attempted to stop him, but were unsuccessful. Thanos even won a standoff with the joined forces of Marvel's cosmic entities. It is only through Thanos' hubris and overconfidence that the universe is spared from his complete and total dominion.

The teaser image, created by Infinity artist Dustin Weaver, is interesting because it shows Thanos with the Gauntlet, but with only the Reality and Mind Gems attached, leaving the Soul, Time, Space, and Power gems unaccounted for.

The teaser also suggests that Star-Lord will be involved in the event, as well as several, possibly even a family, of Nova Corpsmen.

The Infinity Gauntlet teaser is the seventh such teaser, following Civil War, Age of Ultron vs. Marvel Zombies, Years of Future Past, Planet Hulk, Armor Wars and House of M. There was also the Secret Wars announcement from New York Comic Con, revealing the mega-event, written by Jonathan Hickman and debuting in May of 2015.

There's still no official word on a connection between Secret Wars and these other event teasers.