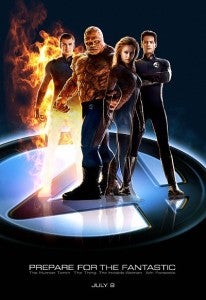 There was something in the water that said this might happen. After some tentative speculation, rumors of a relaunch of the Fantastic Four film series are confirmed. According to Variety, 20th Century Fox will re-boot the two-film series, and it's unclear at this time if any of the actors and actresses who starred in the first two films, Ioan Gruffud, Chris Evans, Jessica Alba, and Michael Chiklis specifically, will reprise their roles in the new series. Based on the announcement of the new creative talent behind the film, it is perhaps highly unlikely. Michael Green, writer of the upcoming Green Lantern film with Ryan Reynolds, will pen the script for the new FF project, and Akiva Goldsman will produce this new project. The future of director Tim Story, who helmed both The Fantastic Four and Fantastic Four: Rise of the Silver Surfer, is also up in the air. Details are still early, but the reboot and the new producer are certainly indicators of a brand new direction. Fox still has plans for a Silver Surfer movie, based ironically on the popularity of the character in the Fantastic Four sequel. There are lots of irons in the fire now with Marvel films, and certainly this news is a particularly interesting one to note, considering the amount of film project going into production such as Thor and Spider-Man 4.

Fantastic Four to get Film Overhaul