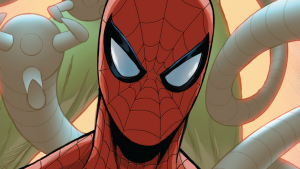 The shocking conclusion of this week's issue of The Amazing Spider-Man, titled "Dying Wish," has left fans baffled as to what that ending means, what comes next and how it all ties into what little we know about The Superior Spider-Man, the Marvel NOW! title coming soon from current Amazing Spider-Man writer Dan Slott. And, of course, everyone has an opinion. Here are some of the cooler, stranger or more likely ideas we've heard today. Peter and Doc Ock Will Share a Body Is The Superior Spider-Man...Doc Ock and Peter?! According to at least one theory, Spidey will call in some help to get himself back into his old body, but that won't necessarily remove Octavius from the equation. It could explain a more violent, "extreme" Spider-Man...but it does beg the question, how does the whole Alpha thing work? Alpha writer Joshua Hale Fialkov recently revealed that Peter will be a supporting character in that comic. Peter Goes to Hell With solicitations teasing that plot threads left dangling since Amazing Spider-Man #600 would be resolved in the next couple of months, it's easy to imagine that some of the fallout from One More Day will finally happen. One of the most obvious things? Well, Peter DID sell his soul to the devil to give Aunt May another shot at life. As Octavius's body, with Peter's mind in it, appears to flatline in the widely-circulated final pages of the issue, does that set ol' Pete up for a meeting with Mephisto? And if so, how does he get out of that one? Strange Magic For the last little while, there have been persistent rumors that Dr. Strange will play a role in the story.  There's certainly nothing to say he couldn't play a role in bargaining with Mephisto, so perhaps the two theories could be connected -- but the people who told us they thought Strange would ultimately save the day didn't mention Mephisto at all. It's not like it would be totally random; Strange teamed with Peter not long ago on The Defenders. The Clone Saga Redux So, if Peter Parker's brain is inside of somebody else's body, and he doesn't have access to his own body, what might help? If there was some easy, convenient way to clone Spider-Man, which had already been perfected to such an extent that it could be done quickly and easily... ...Oh, wait, there is! Could we see the return (after a fashion) of Ben Reilly in Amazing Spider-Man #700? Doc Ock Is the Superior Spider-Man This one's not self-evidently ridiculous since it's more or less directly indicated by today's issue.... ...But who really thinks they'll let the bad guy win in the long run? It seems unlikely.