Hello, students, and welcome to Popcorn Cinema 101. Today's lesson? Five reasons why Joe and Anthony Russo--best known for their work on Arrested Development and Community--are a good fit for the Marvel Universe--and specifically for Captain America: The Winter Soldier, the 2014 film they're directing for Marvel Studios starring Chris Evans. Also, check out the conversation that Anthony Russo had with journalists at the Television Critics' Association yesterday, where he dished about their plans for the picture. 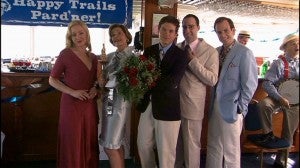 Pilots The Russo Brothers directed the pilots for Arrested Development and Community, two shows with large casts, competing egos and a distinct sensibility for which the stage as set in the first episode. That's what you need for Captain America: The Winter Soldier, since Captain America is leaving the world he knows behind. Sure, he's a little less shell-shocked in this film than he might otherwise have been if he didn't "wake up" to a world that immediately needed him to run off and save it in The Avengers, but it doesn't change the fact that most of what we deal with on a day-to-day basis was science fiction to him a month ago. It'll be a new introduction to pretty much everyone and everything, which is something that directors familiar with TV pilots are pretty prepared for. 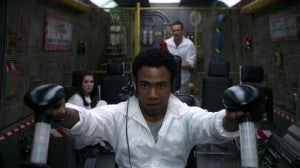 Basic Rocket Science Another example of how Community can turn the simplest circumstance into a big, action-packed set piece, "Basic Rocket Science" saw the cast (minus Abed) trapped in an RV that was made up to look like a space shuttle on the inside. While the vehicle was towed for illegal parking, they had to guide their way through a rocket simulation in order to get the windows open. What does this prove? Well, it goes to show that they're capable of doing a ticking-clock story, which both Captain America: The First Avenger and The Avengers had a little bit of at various points. It also shows off the skill the directors have in shot composition, since he managed to make an entire episode of television look good while shooting from inside of a box. The shot at right is just one of a handful of great shots that expanded the scope and look of the episode beyond what was on the page. The Psychology of Letting Go The flipside of that is the 2010 episode of Community when Chevy Chase's Pierce Hawthorne lost his mother. His bizarre religious beliefs are called into question by the rest of the group,who feel he isn't mourning enough and that he needs to be sadder about what happened. There's a B-plot in the episode where Jeff Winger (played by Joel McHale) is trying to weasel his way back into the life he'd lost before the series started but is being betrayed in his efforts by someone he thinks is his friend. It's a rumination on life, death and the meaning of both, and ultimately a deeply satisfying narrative wrapped around a bunch of jokes. And to an extent, we're going to need some of that quite and serious--but not too serious--character work in Captain America 2. This is still a man, after all, whose friends and family are mostly all dead and the rest of them have moved on without him. As much as Tony Stark made it seem like a joke in The Avengers, Cap's "Man out of Time" thing is not an easy gig, and we need filmmakers who are comfortable with those scenes. F 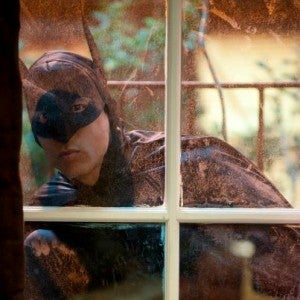 oosball and Nocturnal Vigilantism This was a strange, awesome episode of Community--toggling back and forth between genres and even media (there's an animated segment in the episode) and telling a flashback-heavy story that illuminates a lot about the backstories of characters that fans already thought they knew pretty well. But what's the biggest reason we can use this one? The Russo Brothers have directed Batman. Oh, yeah. Oh, and humor. Did anyone doubt these guys were capable of humor? Well, I mean, besides the audiences who paid for You, Me and Dupree? Having worked on some of the great comedies in recent years, they've figured out how to make both a small committed group of people laugh (Arrested Development, Community) and a broader, less specific audience (Happy Endings). Will Captain America: The Winter Soldier be a comedy? Of course not--but every Marvel film has had humorous elements in it, and the darker the movie gets, the more it leans on the laughs to keep things balanced (see The Avengers). You don't want to descend into grave, dour, The Dark Knight Rises territory in a Marvel film, and the Russo Brothers won't let that happen. Although a cameo from Pudi in the bat-suit would probably only enhance things.

Marvel's Guardians of the Galaxy Has Gone Gold