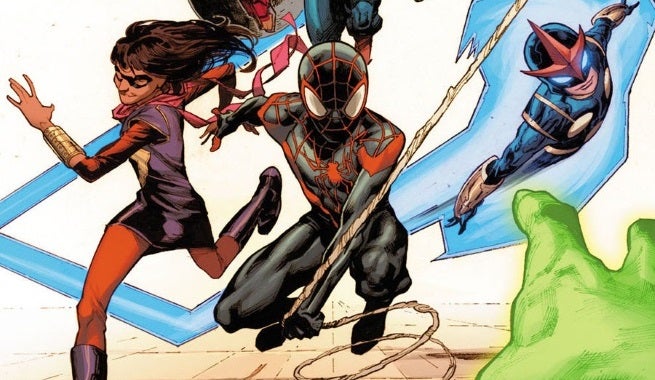 It looks like Miles Morales, the Ultimate Spider-Man, is joining not only the mainstream Marvel Universe, but Earth's Mightiest Heroes.

The full cover of All-New, All-Different Avengers, revealed over at Wired, has revealed both the book's character lineup and creative team. Marvel has been slowly revealing the team's roster, so far showing Ms. Marvel, Thor, Nova, and the Vision. The full cover fills out the rest of the team with Iron Man, Captain America (Sam Wilson), and Miles.

The book will be written by Eisner-winning Daredevil scribe Mark Waid, and drawn by Marvel "young gun" Mahmud Asrar.

The FCBD issue of All-New, All-Different Avengers is said to give fans their first look at the landscape of the Marvel Universe following the events of Secret Wars. The mega-event kicks off with Marvel's mainstream 616 universe crashing into the Ultimate Marvel universe, and many fans have wondered about the fate of the Ultimate Universe's most popular creations, Miles Morales. This reveal seems to set in stone that Miles will both survive the incursion, and become a major player in the All-New Marvel universe.

Kevin Smith Reviews Marvel's Hawkeye: "It's Like a Cup of Cocoa"