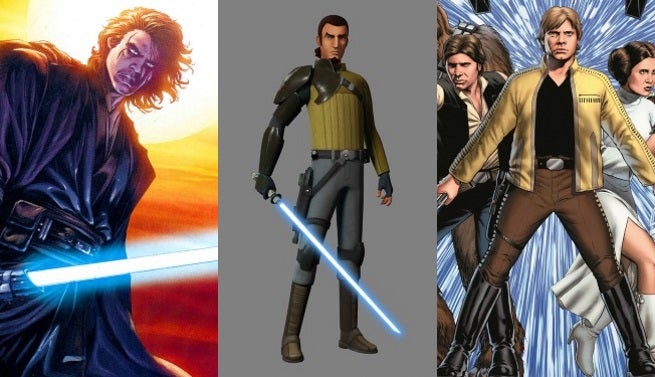 At Comic-Con International: San Diego, Marvel Comics announced that they would be launching a new line of Star Wars comics, which will become official canon of the Star Wars universe

Three titles will kick the line off – a main Star Wars series, a Darth Vader series, and a Princess Leia solo series – all of which are set during the classic trilogy Star Wars era, specifically between the events of Episodes IV and V.

"With these first series, we wanted to stick all in the same era in order to create the sort of inter-connected universe feel we get between Marvel books," he said. "But I am certain we're going to be turning to those other eras in future series. "Heck — I know for a fact we're working on at least one of those … but we're not ready to announce it just yet."

White wouldn't spill any more details about when the series would take place. When Dark Horse had control the Star Wars comic license, they published comics in six distinct eras, ranging from the dawn of the Jedi Order to the far future, 100 years after Luke Skywalker's death.

Those stories were expunged from Star Wars canon when Disney bought the franchise. As of now, only two Star Wars universe eras have officially been acknowledged, those being the waning days of the Galactic Republic, in which the Episodes I-III and The Clone Wars take place, and the era of the Galactic Empire and the Rebellion, in which Episodes IV-VI and Star Wars Rebels take place. Star Wars Episode VII will forge ahead into the post-Rebellion era, shortly after the final battle of Return of the Jedi, which was formerly the era of the New Republic but now is unexplored territory.

Fans will have to wait to see which of these eras Marvel will explore next. Perhaps they'll choose to revisit the Clone Wars or the heyday of the Republic and the Jedi Order. Or perhaps they'll tip-toe back to before Episode IV for a series exploring the further adventures of the Ghost crew from Star Wars Rebels. Or maybe they're waiting for Episode VII to arrive so that they can tell comic book stories of the film's new characters.

Or maybe they'll explore something new entirely. With the Knights of the Old Republic era sadly being expunged from canon, the origins of the Jedi and the Sith are ripe for re-exploration, and rumors surrounding Star Wars Episode VII have suggested that the film will touch on that subject. Maybe Marvel will explore the subject more deeply.

Ms. Marvel Directors Want to see Her Evolve in MCU Similar to Spider-Man