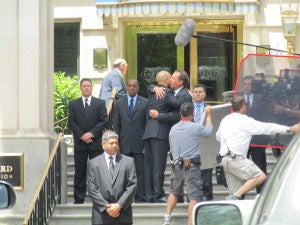 Senator Stern, the political thorn in Tony Stark's side throughout Iron Man 2, will return in Captain America: The Winter Soldier, it was revealed today, after actor/comedian Garry Shandling was seen in photos taken two weeks ago on the set of the anticipated Marvel sequel. In his first Marvel Cinematic Universe appearance, Shandling played a U.S. Senator critical of Tony Stark and eager to put the Iron Man armor to work for the U.S. military. His role in Captain America: The Winter Soldier is as yet unknown, but he's seen here with Agent Sitwell, another holdover from the olden days of the Marvel Cinematic Universe Phase One.