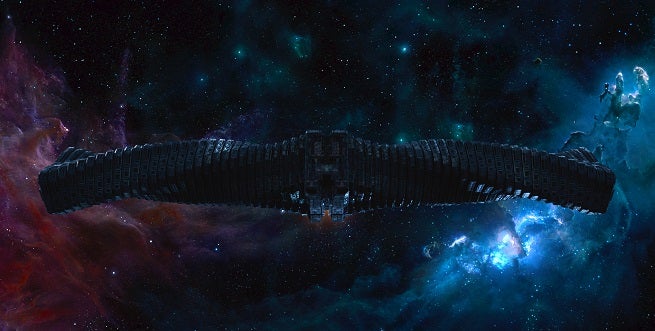 Since Guardians of the Galaxy director James Gunn recently told us in an interview that there was at least one "big" Easter egg that hadn't yet been detected by the fans, our readers have been suggesting all kinds of ideas.

While most of them were ideas we'd either already heard or that could be found with a Google search, there's one that not only doesn't appear to be online yet...but it would qualify as "big."

As in, physically large. The size, in fact, of a massive spacecraft capable of interstellar travel.

We received the following via Facebook, from one of our readers named Rasmus Bomullstuss Lundqvist:

In Guardians of the Galaxy there are coordinates for different places.From my first viewing of the film I knew that they hid stuff in those coordinates.

Some forums have already explained that Morag and Xandar coordinates are in fact real astronomical coordinates in the Andromeda Galaxy.However I solved another coordinate.

"This is moms cancer." I don't think this is a coincidence as Peter Quills mother dies of cancer at the beginning of the film.

Given the appearance of Peter's mother when he holds the Infinity Stone at the end of the film, it seems likely this cypher was there to help further the idea that Peter's journey from snarky loner to the leader of a band of heroes is one that helped him overcome his childhood trauma and the death of his mom.

That's one big metaphor. Wonder what Drax would have to say about that?

Guardians of the Galaxy: This Dark Aster Easter Egg Is Drax's Worst Nightmare