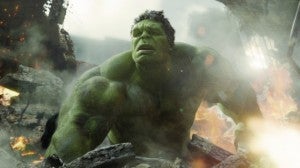 During today's upfront presentation, Disney-owned ABC told reporters that The Incredible Hulk is still something the network wants to develop for television. Guillermo del Toro, the Oscar-nominated filmmaker behind Pan's Labyrinth and the Hellboy movies, is reportedly attached to the project. There had been a lot of speculation that the popularity of the character in The Avengers might lead to a feature film starring Marvel's jade giant, but discussion of the TV show--which, along with AKA Jessica Jones, has been in development for a while at ABC--has been pretty limited. "Hulk is in development," said ABC President Paul Lee at today's upfront presentation. "It wasn't going to be ready this season but we hope it's going to be ready for next season." Expressing an interest in building bridges between ABC's television content and Walt Disney Studios' immensely successful Marvel feature films, Lee said, "We're immensely proud to be a company with The Avengers," he said. "We're going to continue to develop aggressively." He added that there are already some Marvel properties in development, but that none of them were at a place where he could discuss them yet. It doesn't seem implausible that "corporate synergy" could be the reason that Marvel Studios haven't talked very seriously about the prospect of a Hulk spinoff movie yet--certainly if this is in development for television, it behooves them to see where it goes before they sabotage it by putting the property on the big screen. The Incredible Hulk was previously featured in an iconic television series starring Bill Bixby and Lou Ferrigno which remains, arguably, the most successful live-action superhero show ever to hit the small-screen. While it's been hinted that Marvel's TV offerings would tie into the cinematic universe they've crafted with their feature films, it's unclear whether they would look to cast The Avengers' Mark Ruffalo in a prospective Hulk TV series, or if his contract would even allow for that if they wanted it. The last time a studio tried to have a TV-and-movies combo pack was when Ron Howard's ambitious take on Stephen King's Dark Tower series, which is currently in development hell following a last-minute backout by NBC/Universal last year.