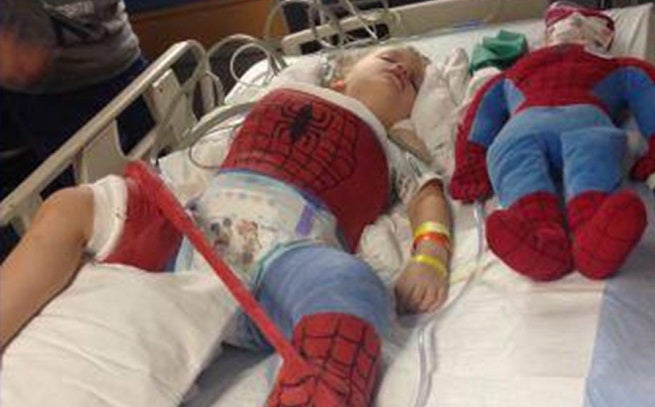 Superheroes have advanced healing to speed things up most of the time, so it's rare that you'll actually see one wearing a cast.

When there is a serious injury to superheroes, often times they get an Iron Man or Booster Gold-like suit of high tech armor that will keep them alive and moving, no matter what's going on in their body.

Of course, in the real world, that's not plausible...but superheroes can still help brighten somebody's day up.

An Arkansas boy headed home from the hospital this week with a full-body cast on featuring the design of Marvel Comics' Spider-Man costume, ABC 4 reports in the video embedded above.

After ending up in the ER with a bad broken leg, three-year-old Spider-Man fanatic Sawyer Singleton's parents were told that he would have to wear a full-body cast during recovery.

"(Sawyer) came in the room and he had his Spider-Man toy and he was a little upset, you know, understandably, so I thought we got to do this thing right," said X-ray technician Ray Sharp after a nurse recommended the Spider-Man cast.

"He was a little groggy after surgery but he was very happy to see himself in the cast and seemed pretty proud to have a Spider-Man cast and felt like he was Spider-Man," said Pediatric Orthopedic Surgeon Dr. Brien Rabenhorst.

They also affixed a cast to the boy's Spider-Man doll so that the two could match.

The boy has about three more weeks in the cast before he's fully healed.