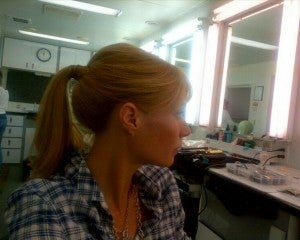 In an interview with E! News, Iron Man 3 star Gwyneth Paltrow told the entertainment network that she's starting to feel too old to continue returning to the big, special effects- and stunts-heavy Marvel Studios films, and has her doubts about continuing to reprise her role as Pepper Potts in Avengers 2. "I just came off of Iron Man 3, which is as special effects-y and action-y as it gets," she's quoted as saying by CBM. "So to do something like [Thanks For Sharing] where it's really small, funny and exciting, is really great. I don't know [about returning for The Avengers' seqeuel], I'm getting old for this s--t, you know what I mean?" It's hard to say what, if any, impact this might have on her Iron Man co-star Robert Downey, Jr., who reportedly fought to have Pepper (and thus Paltrow) included in The Avengers and considers the dynamic between the characters key to how he plays Iron Man but who has expressed no particular desire to stop being Tony Stark anytime soon. It does, though, seem to imply simply by her word choice ("just came off...") that she's already finished filming the movie, which means that her total time on-set for Iron Man 3 looks to be around 2 months. What are her plans, then, whether or not she decides to leave the Marvel Cinematic Universe? Well, she apparently wants to open a restaurant, and has been trying to cow her Iron Man 3 co-stars into a healthier way of living. Now! Magazine reports that Paltrow has been doing battle against The Mandarin's sweet tooth in preparation for opening a Los Angeles restaurant once her schedule clears a bit. Which might, apparently, be during production for the next Avengers pic. Am I the only one who hopes she names the restaurant "Peppers and Pots"?

Iron Man 3 Star Paltrow: Sure About Dieting, Not About Avengers 2