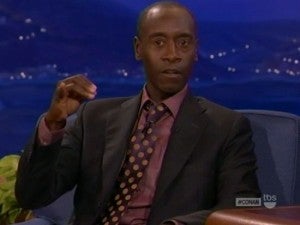 Having tackled fans at Comic Con, Iron Man 3 star Don Cheadle, appearing tonight on Conan, was asked what it was like to work with Sir Ben Kingsley. Asked if he was funny or intense, Cheadle said that Kingsley was all of the above, and told host Conan O'Brien about a strange and funny letter that Kingsley gave to the cast, playing off his reputation. "Ben is a great guy but there was a letter that showed up that was a memo about no eye contact and you had to say "Sir" and if you drank in front of him you had to have your finger out. It seemed like a lot of rules," Cheadle said. "It had Sexy Beast letterhead on the top of it so I don't know." You can see the British drinking pinky gesture at left. He added, "I would say that maybe it was intended as a joke but everyone took it very seriously."