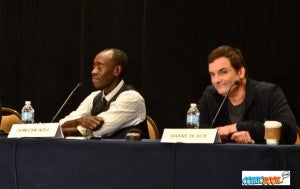 While much has been made of the fact that Marvel plans to shoot part of Iron Man 3 in China--from the relationship with the Chinese government and the reaction of American groups who object to offshoring the jobs--the film's director Shane Black made a surprising revelation at San Diego Comic-Con International: neither he, nor Downey or any of the rest of the film's principal cast and crew, will be headed to China at all. "I assume that when the plates crew goes over to China to film the plates while I'm standing by my swimming pool, that it will go really well," joked Black in response to a question about shooting overseas. "It's weird because we're not going to China," he told the reporters in attendance, before turning to Marvel Studios president Kevin Feige to say, "Can I say that?" "This is why I love Shane," said star Robert Downey, Jr. "He says it, then turns to Kevin and asks him if he can say it." Downey and Black had previously worked together on Kiss Kiss Bang Bang, a role that Feige said was a touchstone for Marvel Studios when they were considering who to cast as Tony Stark/Iron Man. Feige chimed in and compared it to the scene in Monaco from the second Iron Man film (the one where Whiplash cuts Tony's car in half). The second unit films there, so there's actually part of the movie that's shot on location, but that doesn't mean they're going to send Robert Downey, Jr. and company overseas in the middle of production. "Basically we're setting aspects of the film in China but we won't be filming in China," said the director. "That stays in this room!" Don Cheadle chastened the press. Oops.