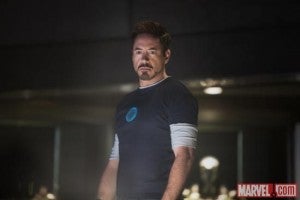 Springboarding off last night's report that the financial state of the Marvel Cinematic Universe cast is up in the air right now, The Hollywood Reporter claims that Robert Downey, Jr. is back in talks for The Avengers 2 and The Avengers 3--but that a prospective Iron Man 4 hasn't come up yet. "But the meal also kicked off a crucial period for Disney, Marvel and Downey because the actor -- arguably the center of the mega-grossing Marvel movie universe -- is not signed for another turn as Tony Stark. Sources close to the dealmaking say Downey has entered negotiations to reprise his role in Marvel's The Avengers 2 and The Avengers 3, the first of which has a May 1, 2015, release date.... Avengers 3 has no release date and probably will not hit screens at least until the end of Phase 3, in 2017," says the trade magazine. "But sources say Iron Man 4 has not been part of the discussions, and it's unclear whether Downey, 48, wants to return for another stand-alone sequel." There could be more to a negotiating process like this than just what Downey does or doesn't want, of course; with the franchise wrapped up in a tidy bow after Iron Man 3 and Marvel keen to develop other properties into successful movies of their own, another Iron Man film--one where they would likely have to pay Downey huge money, but which likely wouldn't generate Avengers-style money at the box office--probably makes little sense to Marvel, either creatively or financially. Bringing him back for a fourth one would also likely necessitate entering negotiations with Gwyneth Paltrow for the next installment, adding another name to the list of actors who feel they have leverage over the studios which, if earlier reports are to be believed, is already a pretty long list.