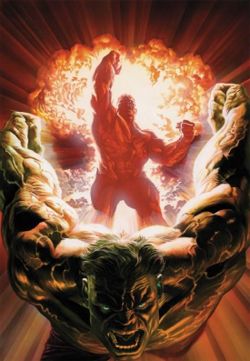 Ah, summer. Time for vacations, fun in the sun and of course comic books. While at any given point during the year there is no shortage of comic book events or storylines, summer seems to have more attention-grabbing events and happenings than any other time. How lucky for comic book readers!

As you're putting together your beach reading, consider adding some of the titles, events and storylines from the list below. First up in our summer focus we look at the books rolling out from the "House of Ideas" itself, Marvel.

Plenty of Hulking Out - The green powerhouse known lovingly as The Incredible Hulk will be getting lots of work this summer, especially in early June when the War of Kings storyline hits in Savage World of Sakaar #1. Son of Hulk will also undergo a shift in storyline as Paul Jenkins takes over the reigns in July. Perhaps the biggest news for Hulk will come with Incredible Hulk #600. This landmark issue will feature Red Hulk, Green Hulk, Spider-Man and a host of other surprises from the team of Jeph Loeb and Ed McGuinness. Speaking of milestone issues…

- Not only will Hulk cross the 600 issue mark this summer, he'll be joined by Captain America #600 and The Amazing Spider-Man #600. Marvel revisits the death of Steve Rogers, promising some major plot twists involving that event. It doesn't end there! In Amazing Spider-Man, Doctor Octopus returns for this special occasion, along with writing from Stan Lee! It's going to be a summer full of milestones for some of Marvel's flagship characters. Daredevil won't be far behind when Daredevil #500 drops into stores in the middle of August.

Dark Reign is Here to Stay

- Marvel plans on continuing its time of darkness and intrigue with the release of several Dark Reign limited series, such as The Sinister Spider-Man, Dark X-Men and the transformation of some series, such as Dark Wolverine. Continuing his demonic plans, Norman Osborn extends his reach into the ranks of the X-Men and wages all out war with them in the upcoming "Utopia" storyline. Things will continue to heat up as well in the pages of Ms. Marvel, as the book finds itself in the thick of the "War of the Marvels" story, with the new Ms. Marvel, formerly the villain Moonstone, dealing with the legacy of Carol Danvers, the original Ms. Marvel. It's certain that the mystery and thrill of Dark Reign is here to stay!

A Summer Fling or Two?

If you're the reader who takes a "Summer Lovin'" approach to comics, just a limited series may sustain you over an ongoing series. Consider Marvel Divas, a four issue series focusing on some of Marvel's less-used female heroines. Also kicking off this summer, from the masterful pen of Ed Brubaker, comes The Marvels Project, the centerpiece limited series celebrating the 70th anniversary of Marvel and its rich history. Perhaps the biggest limited series, no pun intended, comes in the form of Reborn. While much of the project is a mystery, rumors are flying that it is likely the original Human Torch, taking his place in the modern world. Other fingers point to possibly Mar-Vell or Steve Rogers. With issue one quickly on the way, our questions will be answered.

Coming on the heels of Ultimatum comes the newest version of the Ultimate Marvel universe. Ultimate Comics Avengers #1 and Ultimate Comics Spider-Man #1 will both debut late this summer, with Spider-Man potentially seeing significant changes in characters, elements and villains. Ultimatum has wreaked havoc upon this incarnation of the Marvel universe, and when these new books begin to come out, seeing who's left standing will be interesting.

Not to be outdone, DC Comics also has several major events and stories planned, but you've got to check back with us for that part of our look at Summer '09!