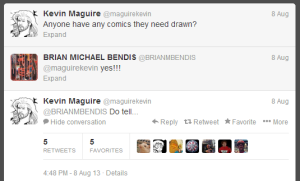 From the Justice League of the Future (that never was) to the "Avengers of the Future," Kevin Maguire has landed on his feet and will draw an issue of Brian Michael Bendis's Guardians of the Galaxy series for Marvel just two days after he learned that he wouldn't be drawing Justice League 3000 for DC. The announcement came officially from Brian Michael Bendis himself, via Tumblr, earlier today when someone asked about the possibility of his teaming with Kevin Maguire for an X-Men story--something Maguire had said he turned down for the opportunity to work with Keith Giffen and J.M. DeMatteis again on Justice League. You can see how it all happened on Twitter at right. Here's the announcement from Bendis:

As I have made it very clear on this tumblr I think artists like Kevin are a national treasure and should be treated as such by publishers and readers alike. As Matt Fraction said at dinner last night, he is probably one of the most influential comic artists of this generation but doesn't get enough credit for it. You can see his influence in a lot of places. We have been talking about working together on an off for a while but the stars never aligned. I am not exactly sure what happened to him this week but I would like to thank whoever it was that made it possible for Kevin to join me on Guardians of the Galaxy number 10, which I hope will be the first of many projects together. I may have just announced something I wasn't supposed to.

Somehow we're sure Marvel won't mind. If there's anything better than getting a fan-favorite artist to draw your book, it's doing so--and announcing it--at a time that does you the most possible PR good. For Maguire's part, he was away from the Internet when it happened and came back to his Marvel welcoming party:

Well, I walked into my yoga class wondering when I could talk about my next book and when I get out it's all over Twitter. Yes, not only have I landed on my feet, I've landed on my tip-toes (at least for an issue). Yes, I'm doing issue 10 of Guardians Of The Galaxy. People who know me well know I normally don't read the books. I'm totally into the movies. My Facebook posts are clear evidence of that. So when it was official I was doing the issue, I went on comiXology and bought all the recent issues to familiarize myself with the characters and, boy, let me tell you, I'm going to have a blast with this book. Interesting,engaging characters, space action, and such clever wordplay. It's a good sign when I'm laughing out loud several times an issue. It's going to be a daunting task living up to the standards set by Mr. McNiven and Ms. Pichelli, but I'm eager to bring my A-game to it. And I'd like to thank Steve and Brian for allowing me to play in their field for an issue. I should stop now because I don't want this to sound like an Oscar acceptance speech. Beside, I have to start searching Google Images for "raccoons."