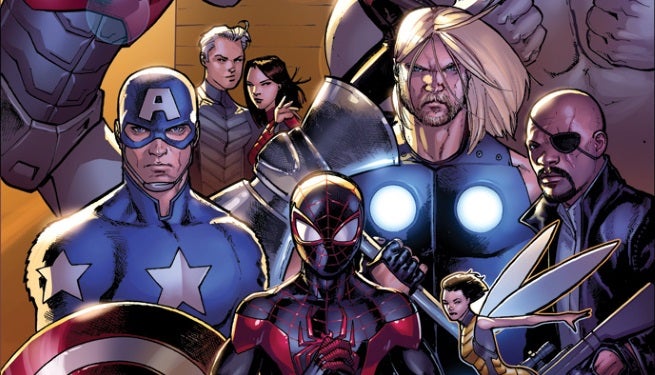 The end beings in Ultimate End #1, one of the Secret Wars tie-ins being published under the Battleworld banner. Brian Michael Bendis and Mark Bagley, two of the creators most synonymous with the Ultimate Marvel line from their long tenure on Ultimate Spider-Man, will serve as creative team on the series. You check out some covers in the gallery below.

The call starts with Bendis and Bagley talking about reuniting for the series that will end the universe they started together. Bendis calls Bagley his "perfect" collaborator, and Bagley talks about how proud he is of their long run together on Ultimate Spider-Man. Bendis said he wouldn't do the series with Bagley along for the ride, and promises to kill Peter Parker in every interview (jokingly).

Macchio gives all credit for pairing Bendis and Bagley together to Joe Quesada, and Bendis also mentions Bill Jemas. Says they saw that Bendis' indie cred and Bagley's mainstream sensibilities would bring the best out of each other. Bendis says his poor spelling is why Macchio retired.

Bendis says the Secret War tie-ins are not traditional tie-ins, but the equivalent of normal Marvel events. Secret Wars ties them together, and they will each seed important aspects of the All-New Marvel universe.

Bagley is looking forward to drawing 616 universe and Ultimate Universe characters together. Bendis praises his versatility and speed.

Favorite Ultimate Universe memory for the creators? Bendis says its the collaborations that helped make him the writer he is today, and the introduction of Miles Morales.

Bagley also says the collaborations, saying he'd never stay on a book for 111 issues if he didn't love the people he was working on it with. He says there's a magic to a book like Ultimate Spider-Man, that can be enjoyed by fans of such different ages.

Macchio says its being able to see a new, secondary Marvel Universe come into its own alongside the old one, especially considering how derided it was initially. He also talks about how exciting it was to be in charge of what felt like his own version of the Marvel Universe.

Paniccia talks about how proud he is of the creators who came up through the Marvel Universe, and how influential it has become.

When, timeline wise, will Ultimate End take place in relation to the incursion event? Bendis says likely concurrently, but he can't give more details because he doesn't want to spoil Jonathan Hickman's story. "By the end of it, it will all come together."

Will the cast be only Ultimate Universe, or will there be crossover? There's a pause, but then they confirm there will be crossover.

Anyone they want to use for crossover? "Batman," Bendis says jokingly. He goes on to say they will see things in this series that haven't been seen in Ultimate Comics before.

With Captain America on the cover of David Marquez's variant cover, does that mean he survived, or is there time travel occuring? They stay quiet for fear of spoiling the Secret Wars story.

Our turn. Did Ralph Macchio ever think the Ultimate Universe would comet his far or end this way? He says, at first, it was just supposed to be a miniseries, but over time it solidified as its own universe. As they added more titles, only then he started to believe it could last and even compete with the mainstream Marvel Universe. He's glad to have been part of it from the beginning. Bendis says Macchio's experience and skepticism was invaluable. Macchio says the faith he had in Bendis and Bagley's storytelling gave him confidence to keep Peter Parker out of costume until the very end of the origin story.

What was Bendis' intention with X-23's line in All-New X-Men about a world that isn't as dark as either the Ultimate Universe or the 616? Bendis teases that All New X-Men is seeding things to come, and he wanted to squeeze in an old fashioned crossover before Secret Wars and Ultimate End. Nothing being done in All New X-Men is an accident. Bendis also mentions that, as an ongoing joke, he has crazy people shout out teases about the big event coming from Marvel in the pages of Ultimate Spider-Man.

Did they ever see this ending coming for the universe? Bendis says no way. Things changed along the way all the time. He never had an end in mind.

Bagley also talks about how he enjoys a long run on a book, and feels that switching artists too often can hurt a product's quality.

If this is the last time you're writing Miles Morales, how do you feel about it? Bendis says he doesn't feel sad, he feels empowered.

Any characters you'd like to see continue onward after Ultimate End? Bendis says its more about the spirit of the universe than the individual characters.

Us again. Any Ultimate versions of a character that you're particular proud of, besides Spider-Man? Bendis mentions J. Jonah Jameson and Venom. Says turning Jameson into a fully formed person is something he's proud of. With Spider-Man, he doesn't need reinvention, the story just needs to be retold, like Shakespeare. Nothing was broken, nothing needed to be fixed, just told in a modern way. Figuring that out is what he's most proud and grateful for. Macchio says he was happy that they played with the Clone Saga and Richard Parker again. The Clone Saga was scary, but Bendis and Bagley did well with it. He was happy to plot it from the beginning and surprise people by not avoiding it.

Last question. Why was it important to bring Peter Parker back before the end, and will he be in Ultimate End? Bendis says he knew it was coming for a while, and he made a bucket list of things to do, including bringing Peter back and the All New X-Men crossover. He says Secret Wars will wrap up lots of the Ultimate Unviverse mythology. Not full closure, but closure for a lot of characters.