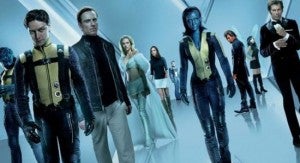 Mark Millar, the co-creator of Kick-Ass and writer of Marvel's best-selling Civil War crossover, will serve as a creative consultant to 20th Century Fox as they navigate the tricky waters of their X-Men and Fantastic Four films. Millar, whose creator-owned Nemesis is in development at Fox already, may have been picked as an obvious choice to collaborate with the studio on The Wolverine due to his work on Old Man Logan, one of the best-selling stories featuring the character in recent years. In spite of not having done a lot of work for the Big Two in recent years, Millar is a frequent commentator on matters of comic book movies on Twitter--now, apparently, he'll have an opportunity to do so professionally. "As someone who has spent his entire life obsessed with both comic-books and movies, this is essentially my dream gig as it's a unique combination of both," Millar said in a press release from Fox. "I spent ten years working at Marvel and am really happy with the work I did on the comic side of things so the idea of working with these characters now in a brand new medium is enormously exciting for me. I really like the Fox team, love this bold new direction they have for their franchises and am proud to be working alongside some of modern cinema's biggest talents. James Mangold is incredible, Matthew Vaughn's one of my closest pals and Josh Trank gave us, in my opinion, one of the greatest superhero movies of the last decade with Chronicle. The invitation to join this crew was maybe the coolest phone-call I've ever had." The directors he cites are all working on Marvel projects for Fox right now, which are in various stages of development. The Wolverine is currently filming under Mangold, while Matthew Vaughn (who directed Kick-Ass) is developing an X-Men: First Class sequel based on the classic X-Men story Days of Future Past and Trank is in the earliest stages of development on a Fantastic Four reboot. Fox currently holds the rights to Daredevil, but those are set to revert back to Marvel in October after a pair of failed attempts to revive the franchise.