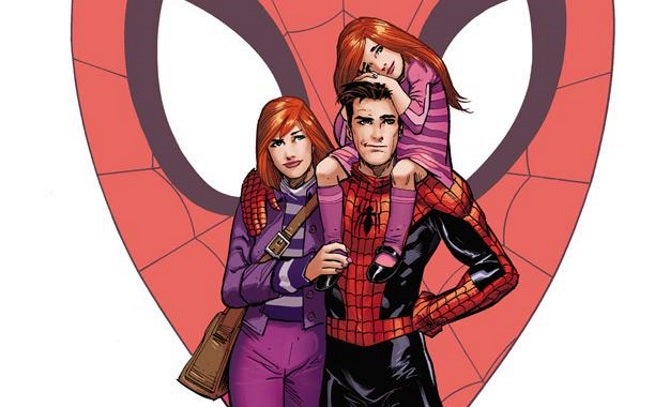 After its controversial dissolution in One More Day, Marvel comics is bringing Peter Parker and Mary Jane Watson's marriage for Secret Wars in The Amazing Spider-Man: Renew Your Vows. Written by Dan Slott, the series brings back both the marriage and Peter and Mary Jane's daughter for what is being described as "the Last Spider-Man Story."

"There are legions of Spider-Man fans that are passionate about changes that have happened to Spider-Man continuity," Slott tells EW. "They are upset that the baby went missing, that the marriage went away. Spider-Man has been around for fifty years, and the marriage was around for twenty-five. So now we're seven or eight years into a world without a married Spider-Man. It's a big itch that people want scratched."

The inclusion of Peter and Mary Jane's child may be an even more contentious point than their marriage, and that's saying something considering it was sacrifice in a literal deal with the devil. The existence or non-existence has been a continuity deathstrap for years, dating back to Spectacular Spider-Man #221, when Mary Jane revealed to Peter that she was pregnant. After that, Mary Jane was poisoned, the baby supposedly stillborn, and somehow Aunt May came back from the dead. Then there were hints that the Green Goblin had actually somehow kidnapped the baby, a plot that was never really resolved, and a fan favorite Spider-Girl series, taking place in a universe where the child not only lived but followed in her father's footsteps as a superhero.

"Spider-Man, when you get down to it, is a character about responsibility. And the second he's a father and a husband—he has a responsibility to share his powers with the world, but suddenly he has two people that are his whole world. That changes everything, the complete dynamic of what it means to have great power and great responsibility," says Slott. "You need to be there for your daughter, you need there for your wife—in a way that he hasn't had to be there for anyone else. And that drastically changes what it means to be Spider-Man."

The series takes place in a region of Battleworld called The Regency, named after the mysterious villain known as The Regent. Slott says that fans should keep an eye out for other classic Spider-Man villains, including Eddie Brock as Venom.

Secret Wars begins in May. Amazing Spider-Man: Renew Your Vows #1, by Dan Slott and artist Adam Kubert, goes on sale June 3. Check out the cover and some sneak peek preview pages in the gallery below.