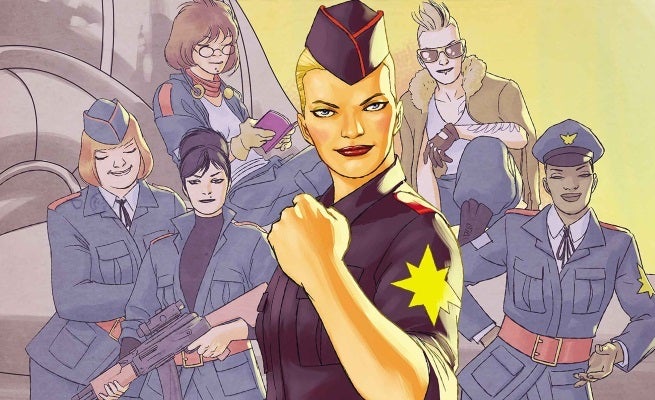 Before she flies onto the big screen, Carol Danvers is leading her fans into Secret Wars in Captain Marvel and the Carol Corps, a new series by co-writers Kelly Sue DeConnick and Kelly Thompson and artist David Lopez.

DeConnick has been writing Carol's adventures since she took on the mantle of Captain Marvel in 2012, dubbing her fans the Carol Corps. For this Secret Wars series, DeConnick, Thompson, and Lopez are taking Carol back to her military roots, casting her as the leader of an all-female squadron of fighter pilots operating out of Hala Field on Battleword, with Carol being the only superpowered human around. The Corps' attempts to trace Carol's origins leads them into conflict with the great Marvel Universe.

"It's really meant to be a celebration of all of the women, and not even just women, all of the fans who flock towards Captain Marvel and Carol Danvers, who are really saluting her while they're reading about her at the same time," series editor Sana Amanat tells Fast Company.

The series will reintroduce the Banshee Squadron – originally introduced in DeConnick's first Captain Marvel story, "In Pursuit of Flight" – as Carol's supporting cast, and DeConnick is using the series as an opportunity to correct a mistake she made the first time around.

"When I created the Banshees in the first go round, I did something really dumb," says DeConnick. "I considered having a black woman be part of the team, and then didn't because in the real-life air service pilots in World War II, the two black women that applied were turned down because of racism. And I thought, well then, I can't have black women here either. Even though at the same time I was breaking all sorts of other rules. For some reason I thought it was okay for them to fight giant robots, but having a black woman was too much of a stretch. It's embarrassing, so when we were talking about bringing these characters back, I had a chance to correct that."

Secret Wars begins in May, and Captain Marvel and the Carol Corps launches on June 10. Check out the cover and Lopez's character sketches in the gallery below.