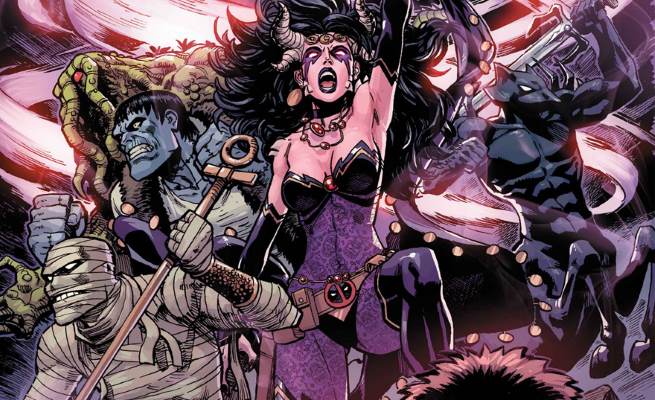 Shiklah, Deadpool's wife and succubus queen, is taking center stage in the new Secret Wars series Mrs. Deadpool and the Howling Commandos. The series is written by current Deadpool co-writer Gerry Duggan, and sees Shiklah taking command of a team of Marvel's monsters, including Werewolf by Night, the Living Mummy, Frankenstein, and Marcus the Unbeatable Centaur.

In current continuity, Deadpool met his bride-to-be when he was hired by Dracula to kidnap her. Duggan says the new series will go back to that first meeting, and show how things went a bit differently on Battleworld.

"We're almost sort of rewinding a little bit to Shiklah and Deadpool's first meeting," Duggan tells HitFix. "It turned out a little bit different on Battleworld than it did in the main universe. It's a spiritual successor to the Gauntlet arc, but it's a little more madcap and fun I hope than some of our recent more serious Deadpool stories. I think anyone that liked the Gauntlet will have a lot of fun here."

Marvel's Secret Wars begin in May. Check out the cover for Mrs. Deadpool and the Howling Commandos below.