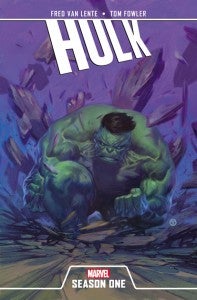 Today, Marvel announced its second wave of "Season One" original graphic novels, and released cover art and creative team information for each of them. Retelling the origins and early adventures of popular characters in a more contemporary setting, but without the universe of continuity that Marvel Comics or even the Ultimate Universe bring with them at this point, many have speculated that the Season One line will be perfect for the bookstore market--something that plays nicely with Marvel's recent forays into digital distribution for their collected editions and graphic novels through Barnes & Noble's new Nook Tablet. Just this week, a software update went out over the air that allowed owners of the Tablet's precursor, the Nook Color, to purchase and access the Marvel material as well. The book announced included Dr. Strange: Season One by Greg Pak and Emma Rios, Hulk: Season One by Fred Van Lente and Tom Fowler, and Ant-Man: Season One by Tom DeFalco and Horacio Domingues. "As a result of the great response from fans and retailers, we realized we couldn't just stop with one wave of titles" said David Gabriel, Marvel SVP of Sales, in a statement. "We're showing our continued support for 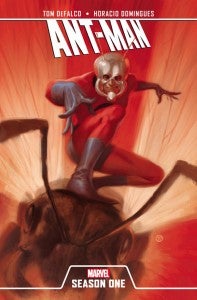 this line by insuring that fans have a reason to come back into comic shops month after month to get the next volumes in the Season One line of original graphic novels." Like the first batch of Marvel Season One graphic novels, Marvel promises that this trio of releases will include download codes to redeem a digital copy of the book you've just purchased. Having stated a policy that their $3.99 books will be bagged to include a code more often, and then presenting a series of original graphic novels that do the same for no additional cost, it's worth asking where Marvel plans to draw the line, and whether we may see redeemable codes sooner than later for things like collected editions of the serialized comics, or download codes that can be used outside of the ComiXology-supported apps in places like the Barnes & Noble or Amazon digital storefronts. Recent interviews have revealed that following The Avengers--2012's big, culminating movie drawing together the story threads from five years worth of Marvel Studios films--the forthcoming third Iron Man movie will set the stage for a similar spate of releases that will take Marvel's cinematic universe in a new direction. Is it possible that, rather than Nick Fury rallying the troops for an alien invasion, that film will include a post-script featuring Stephen Strange gathering the forces of the Illuminati? Bad example, probably, since Ant-Man wouldn't be 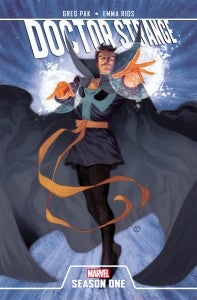 involved in that story and Reed Richards is still stuck at Fox for the near future and won't be likely to tie into any of the A vengers-related films.Given the popularity of The Hulk, and the fact that similarly popular Marvel properties like Spider-Man and the Fantastic Four getting releases in the first wave coming in February, second-tier characters like Dr. Strange and Ant-Man may seem a little puzzling at first. Why would Marvel want to spotlight these characters in a high-profile project before they ever give similar attention to characters like Captain America, Thor and Iron Man, who all appear on the t-shirts and backpacks of school children all over the country? Given the persistent rumors that Marvel are developing movies based on both Ant-Man and Dr. Strange, one has to wonder if that plays a role. Still, something like that--introducing one of these characters and integrating them into the well-oiled licensing machine of the Marvel Studios films--might explain the investment of time and top talent in producing these original graphic novels which, until the characters have a little more mainstream awareness, seem less likely than the first wave to make a splash outside of the direct market.