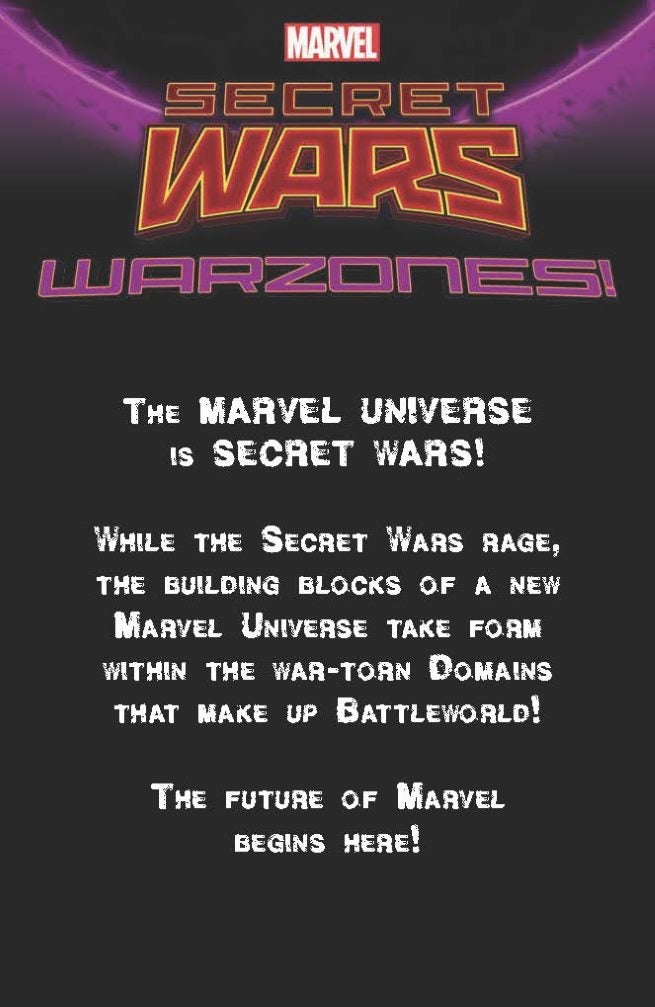 Marvel has announced the third of its three publishing banners for the Secret Wars event, this one called "Warzones."

"If you want a glimpse of what the future holds, you'll find it in the WARZONES titles," says Marvel Editor-in-Chief Axel Alonso in a press release.  "Our creators let their imaginations run wild as they lay down the foundations for the future.  Whether we're revisiting the most popular events from Marvel's past or telling completely new stories, you won't believe what we've got in store for you."

Titles published under the "Warzones" banner will tell stories taking place within the borders of a single fractured region of Battleworld.

"To be clear, WARZONES! titles are NOT fill-ins. These are the event caliber books, magnified to the Nth degree," says Marvel SVP Sales & Marketing David Gabriel, via press relese. "Secret Wars has afforded us a completely unique opportunity to tell huge, epic, event-sized stories within the framework of this new, patchwork planet – events within events. These titles will lay the building blocks and groundwork for what's next, if that gives any indication of how important they are!"

"Warzones" joins "Last Days" and "Battleworld" as the publishing banners for Secret Wars, the megaevent that will end the Marvel Universe as we know it, and make way for the All-New Marvel.