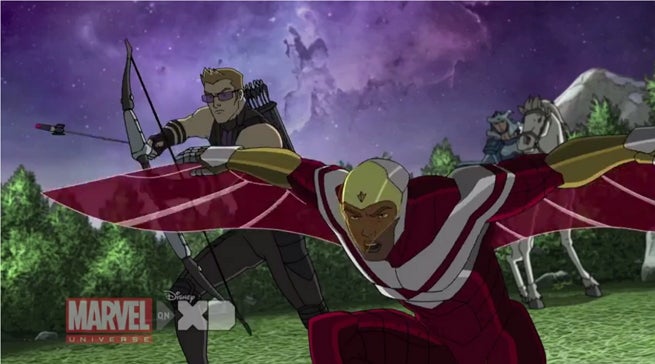 Marvel has released a preview clip from this Sunday's episode of Avengers Assemble, "Downgraded."

The episode sees Falcon put to the test when he and the Hawkeye are forced into battle in a world where technology doesn't function.

BIG HEROES! BIG VILLAINS! AND BIGGER ADVENTURES this week, Share Your Universe with a brand new episode of MARVEL'S AVENGERS ASSEMBLE this Sunday at 8:30am/7:30c inside the Marvel Universe on Disney XD.

When he's stranded without his gear in a dangerous realm where his technology doesn't work, Falcon must prove to himself and skeptical Hawkeye that he's still a hero – even without all his fancy gadgets in an all-new MARVEL'S AVENGERS ASSEMBLE airing Sunday, February 15 8:30am/7:30c in the Marvel Universe on Disney XD.