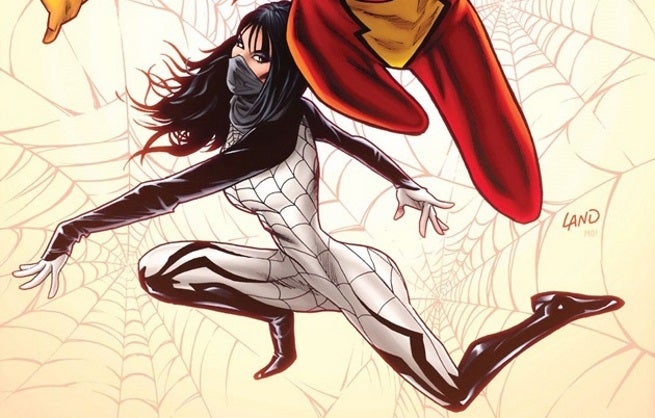 Marvel Comics has registered a trademark for Silk, potentially signaling a new ongoing series featuring the character who recently debuted in the pages of Amazing Spider-Man.

Silk was first revealed as part of Amazing Spider-Man's Original Sin tie-in story, which ran in issues #4-5. The story revealed that Peter Parker wasn't the only teenager bitten by a radioactive spider. On that same day, the same spider bit a teenaged girl named Cindy Moon, granting her spider-powers similar to, but slightly different than Peter's (she's faster, but not as strong, has a better spider-sense, and organic webs that shoot out of her fingertips).

Cindy was hidden away by Ezekial Sims in order to keep her safe from Morlun. Her existence only became known to Spider-Man years later, following the Orb's revelations in Original Sin. He freed Cindy from her self-imposed prison, whereupon she took the moniker Silk. The two entered into an intimate relationship, and Silk aided Spidey in defeating the Black Cat and Electro.

Silk's connection to Morlun is important. Morlun is the antagonist and driving force behind the upcoming Spider-Verse event, which features every version of Spider-Man and every Spider-Family character from across the multiverse. Silk would fall into that category anyway, but her direct connection to Morlun potentially foreshadows a major role for her in Spider-Verse's story.

We know that Silk will be teaming up with Jessica Drew in opening arc of the new Spider-Woman ongoing series, which spins directly out of the events of Spider-Verse. Could Marvel be positioning Silk for her own ongoing series? The trademark would seem to suggest as much. When we reached out to Marvel, they declined to comment, so we can only speculate for now.

Silk can next be seen in Spider-Woman #1, on sale November 19.

Marvel Files For Silk Trademark, Will She Get Her Own Series?