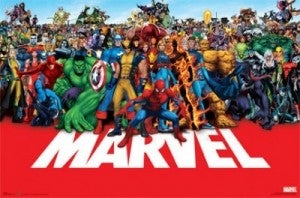 Proving that there are still new and unexplored markets, Marvel has announced a partnership with Hallmark. Yes, Hallmark, the well-known greeting card company has entered into a licensing deal with Marvel to produce greeting cards, special occasion products, party items and other celebratory materials. According to the official announcement, the deal would, "Encompass a wide range of social expression products, including electronic and mobile greetings, as well as Crayola arts and crafts products."It can certainly be called a shrewd business move for both companies, as Marvel seeks to continue its visibility and marketability in another realm of business, and for Hallmark, who will see cards and party products using Marvel film characters and official movie merchandise as a logical addition to their stock. There are thousands of possibilities here, with a line of products for all age groups and holidays possible using several combination of Marvel's most well-known and regarded characters. This could also be a good movie for Marvel to being laying groundwork for future films such as the Avengers movie and the eagerly-anticipated Iron Man sequel.

Marvel Heroes: Appearing at a Hallmark Store Near You?