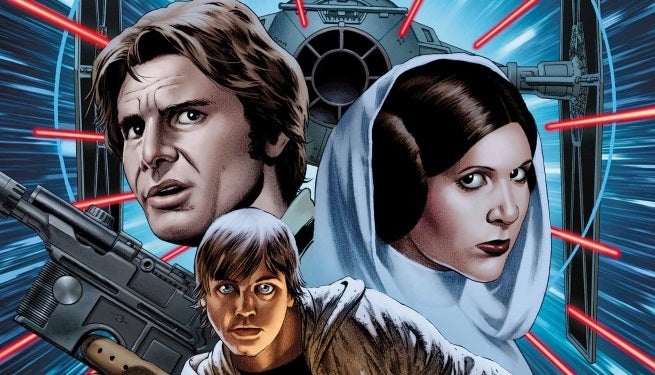 Marvel has released their solicitations for May 2015, featuring new issues of their ongoing Star Wars line and more.

Star Wars sees the penultimate issue of Princess Leia, and the continuation of Star Wars, Darth Vader, and the latest addition to the line, Kanan: The Last Padawan.

Check out the solicitations below. You'll find covers in the gallery at the bottom of the page. Be sure to check out Marvel's core superhero solicitations, and their Secret Wars event solicitations.

• The Empire is rounding up fugitive Alderaanians...

• ...that doesn't sit well with their Princess.

• But what can one woman do against an Empire?

THE GREATEST SPACE ADVENTURE OF ALL TIME CONTINUES!

• As Luke goes home in search of the truth about his late mentor...

• ...Leia takes Han on a secret mission of vital importance to the Rebellion.

• Unfortunately, they both run into some unfriendly encounters.

• His master betrayed and killed, young Caleb Dume is alone.

• When being a Jedi makes him a target, what can a Padawan do?

• Continuing the story of the birth of Star Wars Rebels' Kanan Jarrus!

Used under authorization. Text and illustrations for Star Wars are © 2015 Lucasfilm Ltd.

• Vader continues his investigation into the Emperor's secrets...

• Not everyone wants him to find out the truth.

• Who are Vader's mysterious new rivals?

• Abigail Bullion knew there was something strange about her father's mine in Big Thunder Mountain…but she never expected this!

• Desperate times call for desperate alliances…and a flash flood in the desert town is as desperate as it gets!

• Plus: the shocking truth about the gang of bandits that will change Abby's destiny!

• Balazar has Henry Dean in his clutches and demands to know what happened to the drugs Eddie Dean was supposed to deliver.

• Nowhere to run and nowhere to hide—Eddie's got to explain his failure…but can he do so without revealing his worlds-spanning secret?

THE FINAL CHAPTER IN GEORGE ROMERO'S EPIC EMPIRE OF THE DEAD SAGA CONTINUES!

• Jo tries to make a break from the remote vampire compound, but can one girl outrun the undead?

• As Chilly Dobbs' campaign against Mayor Chandrake falters, will Runyon and Dixie stand by their man, or will Chilly be left out in the cold?

Leaping off your PlayStation into the comic that started it all, a brand-new chapter of the award-winning mashup of cops and capes like you've never seen them before! The biggest mystery in POWERS history comes to a shocking conclusion as Walker and Pilgrim discover the secret behind all the new Powers and all the new Powers-related murders.

The secret origin of Jagger Rose is revealed in this double-sized, all-new story from the creators of POWERS! For those waiting for a new chapter in the biggest crime saga in comics today – your wait is over. Everyone who's read the critically acclaimed first series of THE UNITED STATES OF MURDER INC. has fallen completely in love with the most talented hitwoman in the five families. But where did she come from, and how did she get this good? You'll find out right here!