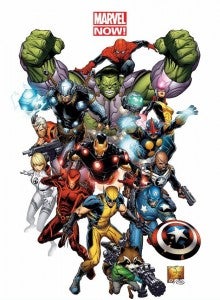 Marvel Comics announced yesterday that they will be releasing a 688-page omnibus hardcover in June, collecting all of the Marvel NOW! #1 issues, not unlike the similar DC Comics: The New 52 omnibus hardcover that was released last year. The book will feature a cover by Marvel Chief Creative Officer Joe Quesada and will be available for $99.99 in June 2013. Not all of the information is yet available for what, exactly, is included in the book. It's believed that there are still some Marvel NOW! titles yet to be announced. The turnaround time is a bit longer than DC's, but that's primarily because the Marvel NOW! relaunch effort is taking place over the course of several months, a few titles at a time, rather than all in one month as DC did. Marvel has long contended that DC foisting 52 new #1 issues on comic book stores was an unfair ploy that would hurt retailers and consumers, although they softened somewhat on that issue after the launch of the New 52 saw higher overall sales across the industry for a few months. Still, this reeks of Marvel watching DC's relaunch and trying their best to copy what worked and avoid what didn't. The New 52 omnibus book was popular enough to merit a 52 Omnibus and another volume -- DC Comics: The New 52 Zero Omnibus, collecting May 2012's "zero issues" -- in time for Christmas. Marvel's omnibus line tends to be more active than DC's, though, with more "complete" books coming out of it, although that's slowly beginning to change. In addition to the New 52 material, stories like Age of Apocalypse from Marvel and The Invisibles from DC Vertigo have arrived in omnibus form this year.