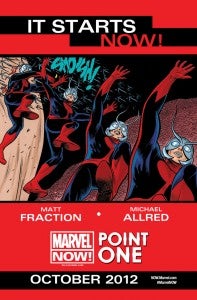 Matt Fraction and Mike Allred will write and draw a story in Marvel NOW! Point One, an issue that will apparently feature Ant-Man, a character who appears in that title and who's expecting his own feature film adaptation to come up. This team will join a number of the other November Marvel NOW! creative teams one the one-shot, which will set the stage for the Marvel NOW! relaunch, altering the status quo for most of the Marvel Universe titles following the events of Avengers vs. X-Men. The final order cut-off is today, and the issue will hit a month from now. Check out the cover at right and the solicitation below.