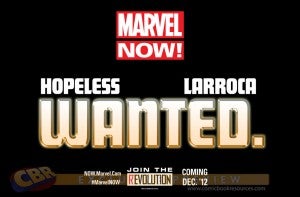 In a pair of new teasers released earlier today, Marvel Comics has teased a title with the tagline "Wanted" from Dennis Hopeless and Salvador Larroca and another with the tagline "Killers" from Sam Humphries and Ron Garney. It's still not immediately clear who might be featured in these titles (they're doing a much better job this time around of making the adjectives inscrutable) but that's part of the fun, isn't it? "It seems likely that the creative team will deal with some kind of secret organization, but whether that organization is an established group of clandestine outlaws -- like 'Secret Avengers' or a revival of 'Secret Warriors'," suggested Comic Book Resources, who got the exclusive jump on the teaser at left (it'll go out without the watermark to the rest of the comics press later today), "or brand new for a post-AvX Marvel U remains to be seen. No doubt more details on who is 'Wanted' will surface by the conclusion of Avengers Vs. X-Men later this month."

There's similarly no real clue on the "Killers" teaser, although the comments thread across several sites seems to have X-Force in the lead on that one. The color scheme could also suggest Annihilators, or my personal favorite: Silver Sable and Paladdin. Given the violent imagery and the thematic similarity of this week's teasers ("Wanted," "Killers," "Survive" and a "Lightning" teaser with a gun sight on it), it seems likely that this week's Marvel NOW! teasers are all interrelated. Are they a single family of titles, a la "Secret" this and that? Or just a little corner of the Marvel Universe that will be sort of pulpy superheroics? Hard to say. Hopefully we'll learn more soon.