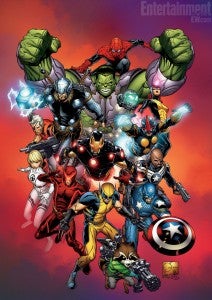 Yesterday, Entertainment Weekly finally solidified some of the amorphous rumors that have been floating around the comics industry for a while about a "Marvel relaunch" with a story on the Marvel NOW! publishing initiative. Launching a new #1 issue every week for months, Marvel will relaunch individual titles, but not the continuity of the Marvel Universe. Of course, by their own claims, Marvel's superhero universe will be radically altered by the events of Avengers vs. X-Men, including the presence in our time of X-Men who traveled here from the past, effectively altering the timestream. While this month's X-Treme X-Men #1 will feature a similar group, those will be traveling through time and the multiverse, using the modern Marvel Universe as their home base, as opposed to the All-New X-Men title that Brian Michael Bendis will launch in October, which stars a group of X-Men from the past, visiting our time and, presumably, eventually returning to their own. Along with that, there's Uncanny Avengers and a rebooted Avengers team, and...well, a lot. But we don't know what yet, or at least not officially. Bleeding Cool, who have been the tip of the rumor mill's spear for some time, have been keeping a running tally of what they're hearing and giving fans a sense of what to expect from Marvel NOW!. Captain America will reportedly be taken over by Rick Remender, with Ed Brubaker leaving the title but remaining on the Winter Soldier spinoff. With John Romita Jr. reportedly coming aboard as artist, one assumes it will be a much different-looking Captain America evn before you consider that he's apparently taking on the movie/Ultimate Universe costume in the Marvel Universe proper (as seen in the image above by Marvel honcho Joe Quesada). Liberty Meadows creator Frank Cho, the indie superstar best known as a cheesecake artist, will reportedly take over Wolverine, both writing and drawing the series, which will tie in with Uncanny Avengers and All-New X-Men. The rumor site also has Matt Fraction and Salvador Larocca leaving Iron Man and heading over to Fantastic Four, replaced on Ol' Shellhead's title by Kieron Gillen and Greg Land. Avengers Assemble will reportedly be handed off to Mark Waid when Bendis leaves it (remember that he told us a while back that he was already done writing it?), but likely won't be rebooted because, let's face it, the book will be less than a year old when Waid gets his mitts on it. Brian Michael Bendis has been attached to both Guardians of the Galaxy and Nova, although even Bleeding Cool isn't sure of the latter, saying that it might go to Marvel TV head Jeph Loeb. They're somewhat more sure, though, that the art on the series will be provided by Ed McGuinness, who of course has a long working relationship with Loeb. Lastly, they're also hearing that Hulk and the Agents of S.M.A.S.H., in addition to being a new TV series on Disney XD, will be a new series written by Jeff Parker. A major change to the Hulk status quo might explain the armored appearance he's taken on in the Quesada image. These are all rumors, but Bleeding Cool's first few guesses all turned out to be right, plus/minus one artist out of the three. How many of these, and what else, we can expect to be announced at San Diego Comic-Con International next week is an interesting question, and one that will likely spark a ton of conversation and change the face of the Marvel Universe and the comics industry for the next year.