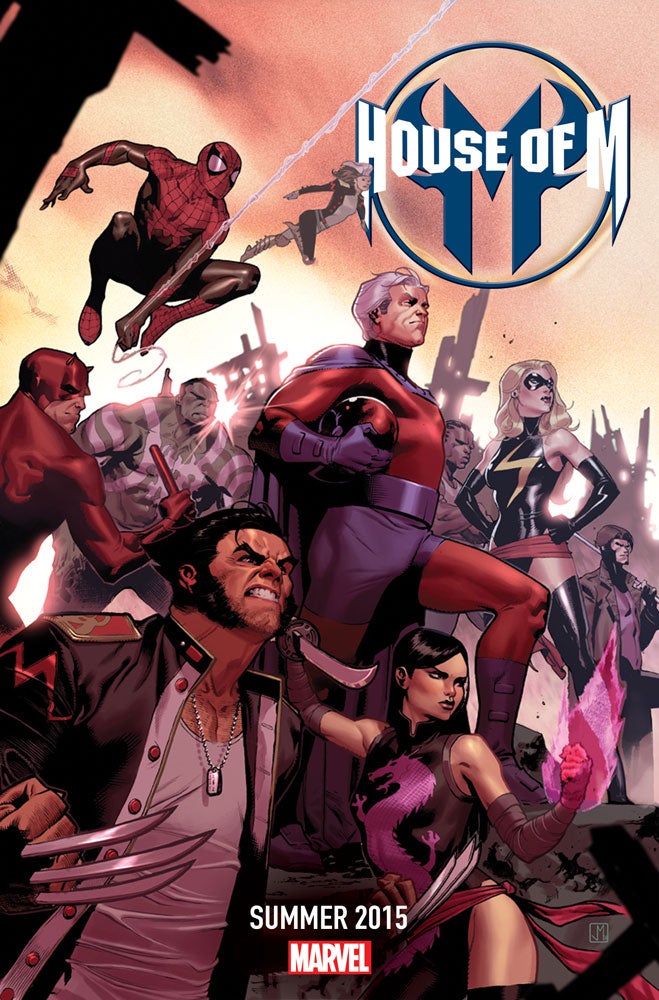 Marvel Comics will return to the House of M universe in summer 2015, according to the latest in a series of teaser images released by the publisher (via IGN). The teaser features the art of Jorge Molina.

The original House of M was 8-issue event miniseries published in 2005, written by Brian Michael Bendis and drawn by Olivier Coipel. The event dealt with the fallout of Avengers Disassembled and the problem of the Scarlet Witch, who had gone insane and killed several of her teammates. Having failed at trying to help her through psychic therapy, Professor X calls on the X-Men and the Avengers to convene and decide the fate of the disturbed, mutant Avenger.

However, the Scarlet Witch's brother, Quicksilver, figures out what the Avengers and X-Men plan to discuss as soon as he hears they are meeting. Assuming this means the worst for Wanda, he races to Genosha, where she has been kept, and appeals to her to use her powers to save herself. The Scarlet Witch recreates reality so that everybody in the Marvel Universe has what they've always wanted. Primarily, Magneto finally has a world where mutants are in power, and "sapiens" are second class.

What House of M may be best known for is the famous line spoken by the Scarlet Witch at the series' climax: "No More Mutants." This spell instantly reduced the population of mutants to below 200 in the world, and set the stage for years of X-Men stories to come.

House of M is the sixth teaser released since last Monday, following Civil War, Age of Ultron vs. Marvel Zombies, Years of Future Past, Planet Hulk, and Armor Wars. Collectively, these all followed the Secret Wars announcement from New York Comic Con, announcing the Jonathan Hickman written series as the major event of 2015, beginning in May. There has still been no official word on whether or not Secret Wars is somehow connected to all of these other event returns.

Marvel Returns To House Of M In Summer 2015