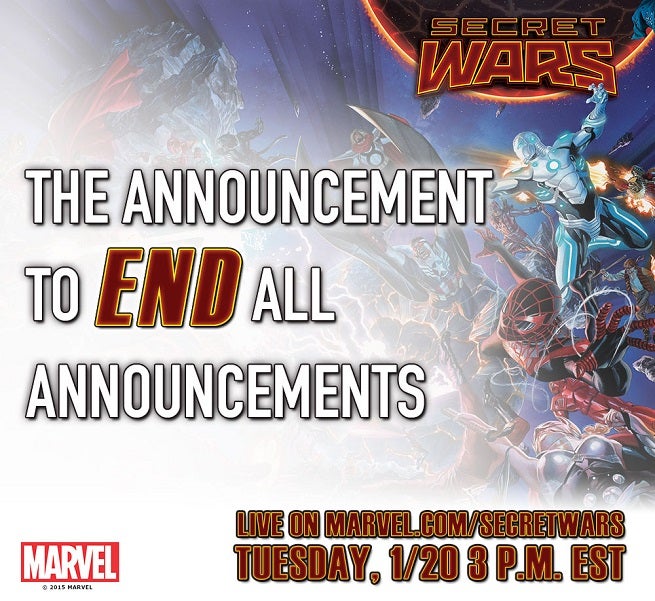 The pledge made its way onto @Midnight tonight, so while the mainstream audience is trying to figure out just what a major announcement from Marvel might look like next week, we've got some thoughts of our own.

First of all, the announcement:

This May, time has run out and Secret Wars, the landmark 8-issue event, is ready to shake the very foundations of the Marvel Universe as you know it. But first, on Tuesday, January 20th 2015 at 3 p.m. Eastern, we're hosting the ground breaking SECRET WARS LIVE KICKOFF!

Streaming live from New York City's own Midtown Comics next week, fans can head to Marvel.com/secretwars to get their very first Secret Wars info straight from Marvel's Editor-in-Chief Axel Alonso and SVP, Executive Editor Tom Brevoort! Prepare for the coming of a new Battleworld and learn the first details of the strange, patchwork realm playing host to countless separate realities!

The road to the biggest comic event of the year has begun, and you will not want to miss the first Earth shattering revelations that will have everyone talking! What will happen when Time Runs Out? What secrets does Battleworld hold? Tune in on 1/20 for the answers to those questions and more.

A unique collaboration with Midtown Comics, the SECRET WARS LIVE KICKOFF can be viewed on Marvel.com/secretwars at 3 p.m. EST on Tuesday, 1/20/2015. For more details, keep your eyes peeled to Marvel.com and join in the conversation on social media using the hashtag #SecretWars.

First and foremost, it seems likely to be a comics announcement. Not just because it's got comic art all over it and the Secret Wars branding attached, but because it's being made at a comic book store. So that informed some of our speculation.

There's also the phrasing: The announcement to end all announcements. Given Marvel's recent love of wordplay and the fun they've had out of being extra literal with things like Ant-Man's "small" promotions, that in and of itself could be a clue.

The idea that Marvel Comics could reboot their publishing line in some form or another has been around for years.

It was talked about rather loudly following the success of DC's The New 52 launch, which propelled Marvel's Distinguished Competition to the top of the sales charts for the first time in years, grew the overall size of the comics market and seemingly influenced Marvel's decision to launch the Marvel NOW! branding, complete with a lineup of relaunched (but not, at that point at least, rebooted) titles.

Why do a reboot? Well, the movies are driving a lot of interest in Marvel's content, but the comics universe really doesn't resemble the films all that much. Marvel has been piecemealing it together over time, but a clean break from the previous continuity would allow them to set all the pieces where they want to on the board.

It would also play into recent speculation that Marvel's "rolling timeline" could be somewhat altered, allowing for Fantastic Four and other Marvel properties not owned by Marvel Studios to become period pieces with looser ties to the rest of the Marvel Universe.

DC's first reboot, which took place following Crisis on Infinite Earths thirty years ago, did this: the heroes of Earth-2, populated by Golden Age characters, were shunted instead to the past, where they could be part of the main timeline and serve as inspiration for later heroes but wouldn't interact with them for the most part. 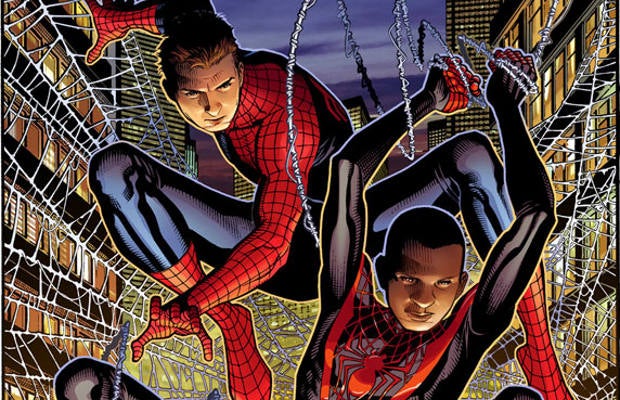 While DC has often used their multiverse as a grand canvas for storytelling, Marvel's has typically been used more scarcely. Even the naming conventions are set up for this; Marvel's central universe is #616 and other commonly-used variants are #1610 and #199999. Those aren't exactly "Earth-1" and "Earth-2."

Yet, what we've seen from Secret Wars indicates that a number of places throughout time and space will be coexisting on Battleworld. Age of Ultron, a recent crossover that's probably poised to be the most easily-marketable book in Marvel's backlist in 2015, also jumped around time, space and the multiverse more than most Marvel tales.

With a series of "the end of everything!" stories hitting the Ultimate Universe, but Miles Morales too valuable and beloved to lose, either folding that world into Marvel's main line universe or at least making the distances somewhat easier to traverse and then eliminating the Ultimate titles (aside from Miles') seems like a fairly easy answer to their issues, and would function a bit like the pre-Crisis on Infinite Earths multiverse that DC had and appears poised to restore following their Convergence event -- which, it's been noted, is pretty much the same concept as Secret Wars except that it will be done by the time Secret Wars is getting off the ground becuase of a two-month publishing schedule instead of a year for Marvel's event.

If Marvel thought the two were going to be too similar, perhaps that's why they would take time out to "answer burning questions" about Secret Wars long before it begins being published; so that fans know what's coming and don't blame them for "copying" something that was being developed at the same time.

How could they do something similar here?

Simple enough: Brand Phase Three of the Marvel Cinematic Universe "Secret Wars." Stop calling the Phases by numbers, which eventually people will start to lose track of or make fun of as the numbers climb higher.

A small "Secret Wars" logo on movie posters and the like could tie the Secret Wars comics mega-event to the next big batch of Marvel films, which would then help create visibility and marketability for the toys, clothing, comics and more expected to come out of Secret Wars.

And? It kind of works. Three of the planned films coming up have "War" in the title (Captain America: Civil War and the two-part Avengers: Infinity War).