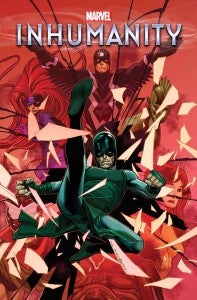 Marvel's series of cryptic teasers, released throughout the week and asking questions like "Is he...?" and "Are we...?", have been leading up to a single question: "Are you Inhuman?" It's part of a teaser campaign for Matt Fraction's Inhumanity, launching in December from the publisher. What, exactly, is going on? Well, all will be revealed on September 18, whatever that means. That's the day Infinity #3 hits the stands, and since these teasers have already been confirmed as spinning out of that event it seems likely that's the issue we'll find out more about all of this in.

Marvel's "All Will Be Revealed" Teasers Culminate With Inhumanity Preview Image