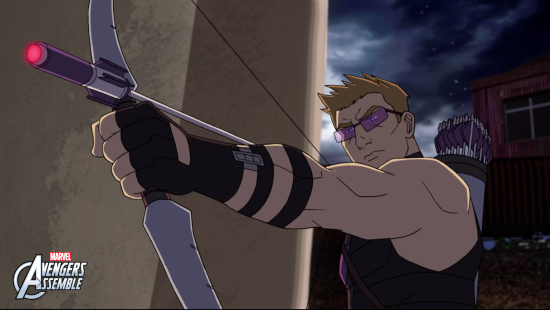 Marvel and Disney XD have released a preview clip from this week's episode of Marvel's Avengers Assemble, titled "Crimes and Circuses." This week's episode is Hawkeye-centric and features Clint Barton's nemesis, Trickshot.

BIG HEROES! BIG VILLAINS! AND BIGGER ADVENTURES…this week Share Your Universe with a brand new episode of Marvel's Avengers Assemble this Sunday at 8am/7c inside the Marvel Universe on Disney XD. Marvel's Avengers Assemble  - "Crimes and Circuses" When the Circus of Crime rolls into town, Hawkeye's dark past begins to surface and puts the Avengers in danger. He learns that being honest to his teammates is more important than trying to hide his mistakes from his past.