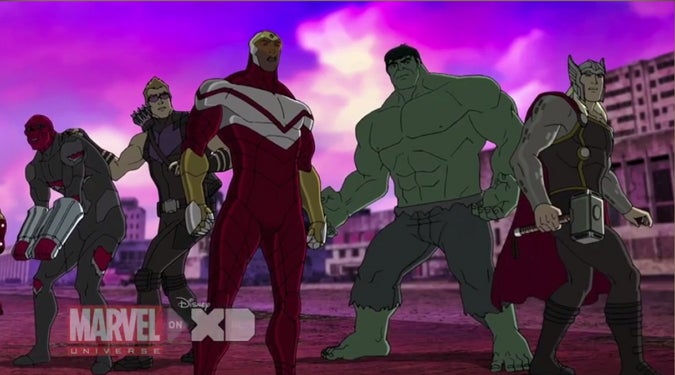 Marvel has released a preview clip from the series premiere episode, titled "The Arsenal."

Check it out Below:

BIG HEROES! BIG VILLAINS! AND BIGGER ADVENTURES this week, Share Your Universe with a brand new episode of Marvel's Hulk and the Agents of S.M.A.S.H. this Sunday at 8:30am/7:30c inside the Marvel Universe on Disney XD.

When Red Skull comes crashing to Earth with a fleet of alien ships chasing him, the Avengers learn there's a villain in their midst a thousand times more dangerous than the Cabal ever was: THANOS! Earth's Mightiest Heroes are forced to face the fact they're big fish in a small pond - and this new villain wants to conquer the entire ocean! Will the mightiest superheroes on Earth be able to stop the super-villain of the galaxy…before he succeeds in becoming all-powerful?