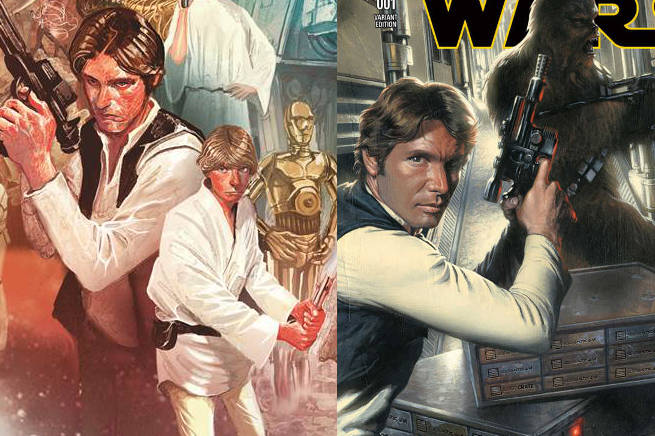 Yesterday saw the release of one of the biggest comics of the last decade, Star Wars #1. The issue, by the powerhouse creative team of Jason Aaron, John Cassaday & Laura Martin, marks the rebirth of the franchise's life at the publisher. We sat down with Marvel's SVP of Sales & Marketing, David Gabriel, about the impact Star Wars has not only on Marvel's publishing line, but the industry as a whole. Not only that, we get a look at a fresh new variant cover for the book and some hints at things to come.

To kick things off, I know in our last interview you mentioned that there were a few outlets outside of the Direct Market that were selling copies of Star Wars #1. Can you share those details?

Absolutely. We had tremendous successes with Star Wars #1 both in and out of traditional comic shops. But I should say that for as great as it is to see this comic in new places, well over half the sales of Star Wars #1 came from your local comic shops. I cannot underestimate how valuable they've been in supporting this series and I wanted to take a moment to thank them for all their help.

In 2014, we had been exploring a number of new avenues for getting comics into fans hands. For example, we partnered with Loot Crate to get copies of Rocket Raccoon #1 out there in advance of Marvel's Guardians of the Galaxy. The potent combination of Marvel and Star Wars was the perfect opportunity to take that idea to the next level. Star Wars is a brand that resonates so deeply with countless generations of fans. Couple that with a new, high quality, in continuity story from Marvel's hottest creators – Jason Aaron and John Cassaday and overseen by talented editor Jordan D. White, it was an easy sell to places that had never carried comics before. 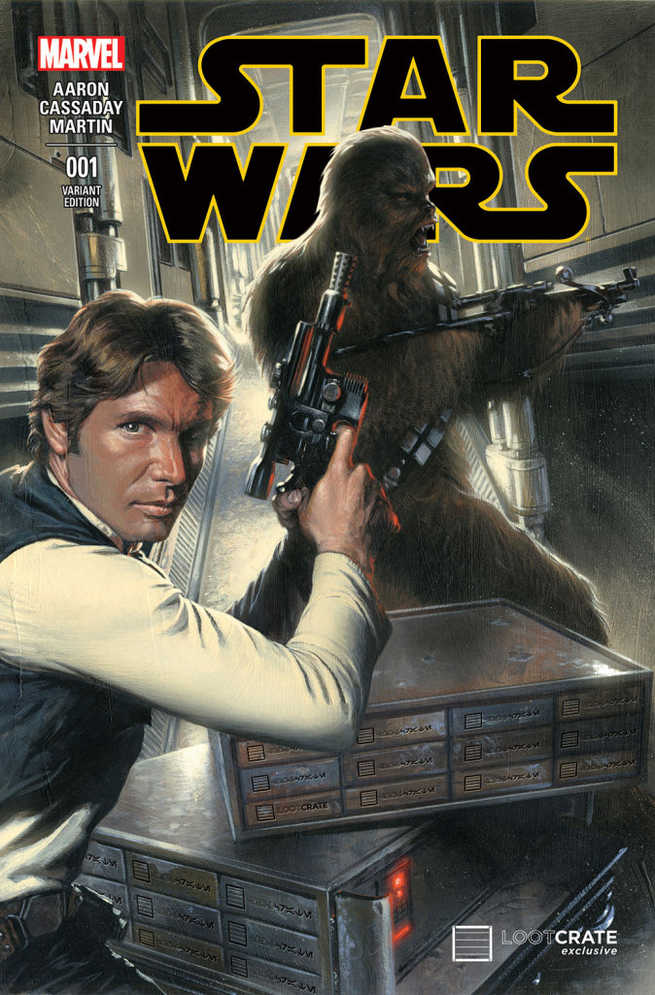 The EMP Museum in Seattle will also be carrying copies of Star Wars #1 to support their upcoming Star Wars and The Power of Costume exhibit. Yes, you can find Star Wars #1 in a museum! 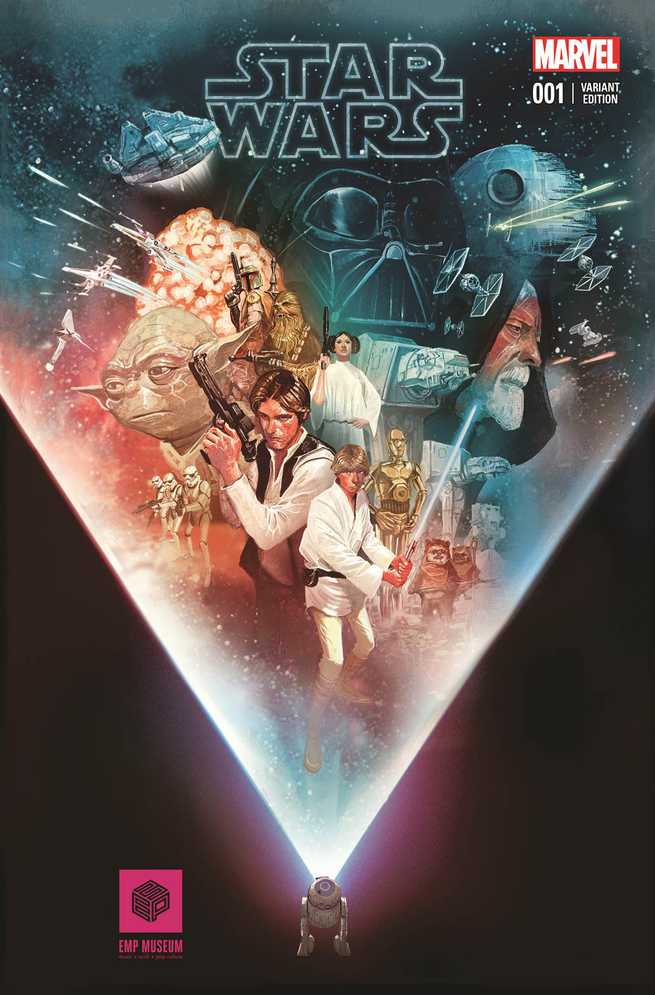 Star Wars returning home to Marvel is about as monumental an event as you can get, so we rolled out the biggest red carpet we could find. We knew it would be huge. Hitting an unprecedented 1 million+ units was just a testament to all the hard work of the creators, editors and the sales and marketing team!

How important is it for Marvel that these be available though these channels?

Extremely important! Finding new ways to get comics into the hands of new fans is critical. Thankfully the tools to reach new fans and new customers are more diverse and far reaching than they were in the days of spinner racks at the 7-Eleven.

We're also grateful to have the support of the StarWars.com team and the Lucasfilm folks to promote the launch. They've been invaluable in reaching out to new fans who may not be searching out comics and comic stores.

Is there a way for a fan, if they were so inclined, to get a bundle with all of the variants?

Unfortunately no. Part of the draw of offering up exclusive covers to comic shops across the country is they're just that – exclusivity. It's a way for those shops to drum up some interest and advertise their store. I have however seen some shops online offering up bundles of the Marvel created variants.

Absolutely! I'm thrilled to be able to announce here that Darth Vader #1 will surpass 200K units! Let's not forget that in today's market selling 200k of any book is still extraordinary! Again, I think that's the strong resonance of Star Wars with fans all over the world and the top-tier talent on these titles. Kieron Gillen and Salvador Larroca are going to take you inside the mind of one of the most complex villains in history in a completely new way. I think fans are going to dig it.

As for Princess Leia – it's been a huge year for comics with female leads. Not just at Marvel but across the industry. So of course people are excited about a new comic starring arguably the most recognizable heroine in all of popular culture!

Plus, the word of mouth on Star Wars #1 has helped garner renewed interest in the rest of the upcoming titles. We're beyond proud of the first issue and thrilled we could get it into the hands of so many new fans, and hopefully help grow the industry! 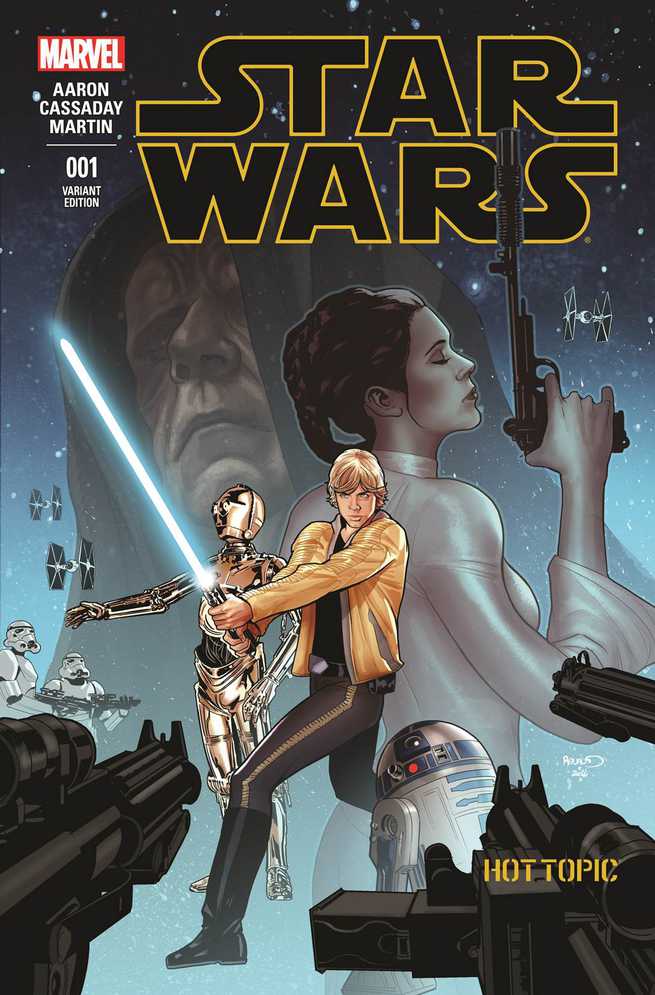 Between the new books being launched, the original collections, and the re-mastered editions, the publishing plan looks extremely robust. Does Marvel have plans to continue publishing Star Wars comics for the foreseeable future?

Definitely! It's too early to talk about the specifics but we have big plans for the Star Wars Universe. Amazon just named the Star Wars: The Original Marvel Years Omnibus, Best Graphic Novel of January, critics and fans alike are over the moon about Star Wars #1, and we've got a packed slate of comics on the way. Look for some BIG Star Wars comics announcements in March and April!

To quote someone famous, we've just "taken our first step into a larger world."

Are there plans to create series that explore the gaps between any of the other movies? Possibly even between Return Of The Jedi & The Force Awakens?

Uhm…these are not the droids you're looking for.

To catch more ComicBook.com coverage of Star Wars, check out our review, this interview with it's editor, and a handy dandy Easter egg post.

What did you think of the issue? Head on over to The Spoiler Room and let us know!

Hulu's Ghost Rider Show Was Intended to Crossover With Helstrom, Two Other Shows