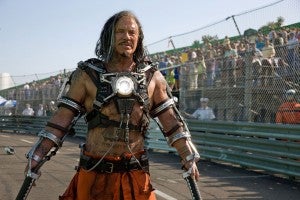 Earlier in the week, MTV's Splash Page interviewed actor Mickey Rourke about his new film, Immortals, and reported that he had very few good things to say about Iron Man 2, the disappointing Marvel sequel he co-starred in last year. The Sin City star told Crave Online that he felt many of the best parts of his performance as the villain Whiplash were left on the cutting room floor after too much interference from Marvel executives and suggested that director Jon Favreau was "doesn't have any balls." Rourke said that it's important villains are given more than one dimension, and that they've got depth of character, in order to be interesting. But, he continued, "You have to fight for that though, to bring layers to the character. Otherwise, if you're working for the wrong studio or let's say a director that doesn't have any balls, then they're just gonna want it to be the evil bad guy."