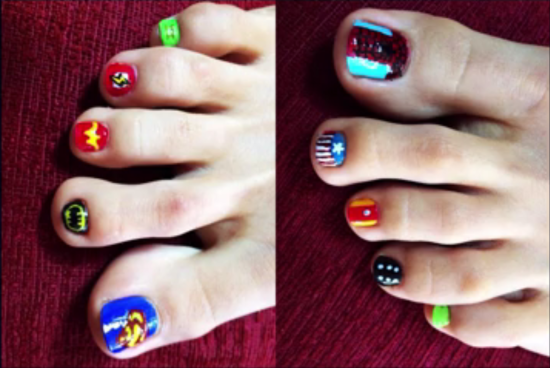 Nathan Fillion is a talented actor with a cult following thanks to his role at Malcolm Reynolds on Firefly. His popularity only grew with the geek community when he played Captain Hammer in Joss Whedon's Dr. Horrible's Sing-Along Blog and then became the go-to voice actor for Hal Jordan DC's animated features. Now, he stars on the hit ABC series Castle. But Nathan Fillion also has a hidden talent: he's a gifted toenail artist. Fillion revealed this fact on last night's episode of Conan and said it began with his girlfriend looking at toenail art online. "My girlfriend was looking at all this incredible toenail art online and I said 'I can do that,'" explained Fillion." Fillion decided to try it and painted superhero logos on his girlfriend's toes, splitting them evenly between Marvel and DC characters. "I wanted to keep it interesting for me, so the hero stuff I like. We did one foot Marvel and one foot DC," said Fillion. "It's not easy work, I'll tell you that." Doesn't look like he did a bad job either. Castle airs Mondays on ABC.