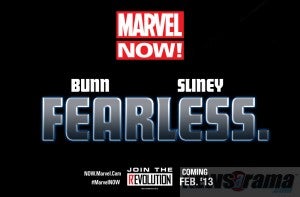 While there's no indication that Mark Waid's fan-favorite run on Daredevil will be coming to an end anytime soon, the Man Without Fear is one of two likely possibilities for a new Cullen Bunn/Will Sliney series being teased today for Marvel NOW!, the wide-reaching relaunch initiative at the House of Ideas. It's probably more likely, though, that rather than trying to take on Waid in a head-to-head that he'd almost certainly lose, Bunn will be taking on The Fearless, the same group of hammer-wielding superhumans that he explored when he wrote the 12-part Fear Itself: The Fearless miniseries a few years back. That's what Newsarama thinks, anyway, and they'd be in a position to know, since they're teasing the reveal in a week when Bunn and Sliney discuss it with them.