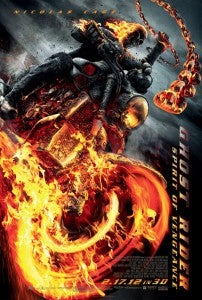 has the new trailer for Columbia's Ghost Rider: Spirit of Vengeance (courtesy Yahoo! Movies). This time, the trailer has quite a bit of action, and trades out the sense of humor introduced in the first trailer (flaming pee, anyone?) for a sense of grandeur, as Ghost Rider takes control of a piece of heavy construction equipment and we get to see it twisted and engulfed in flame like his bike. The first movie was a commercial and critical bomb, but it looks as though while the movie itself has made some tweaks (it looks like it's embracing horror a bit more this time around, and maybe that Ghost Rider will be using his powers more creatively this time around), Nic Cage has pretty much returned to form. His brooding in the quiet moments and screaming in the action sequences is all Cage. All it's missing is some bees. That said, the trailer looks more promising than did any of the promotion for the first film, and the devil/antichrist plot fits well with the way they've built this character, even if the darker turn does seem to isolate this character from the rest of Marvel's movies. [phpbay keywords="ghost rider" num="2" siteid="1" category="11232" sortorder="BestMatch" freeshipping="true" templatename="columns"]