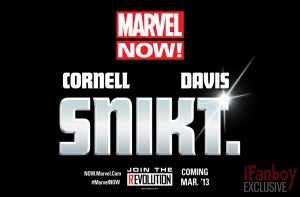 Paul Cornell and Alan Davis will take on a new Wolverine series for Marvel NOW!, iFanboy breathlessly reports. At least, that is, unless Marvel is really, really messing with people. Back when we talked to Brian Posehn and Gerry Duggan about Deadpool, we joked with the writers that their "Chimichanga" teaser was, up to that point, the only Marvel NOW! poster that left very little to the fans' imaginations. With "Snikt" being the teaser here, it's pretty much guaranteed that a Wolverine series is what we'll see coming up. Our bet, if we had to make one? A title called "The Wolverine," which would of course then share a name with the upcoming film released under the same name. There is, of course, the outside chance that the series will follow Weapon X from the Age of Apocalypse ongoing, or Wolverine's daughter X-23, but it's difficult to imagine either of those characters supporting their own monthly in the current market--and so far the Marvel NOW! launches have all been either reimaginings of existing titles or books that either are or could be major motion pictures. In all likelihood, we'll know more on Black Friday, as generally Marvel gives a site the exclusive teaser and then gives them the story seven days later.