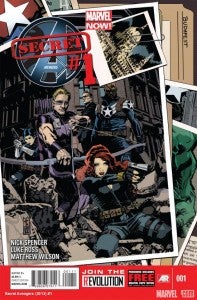 writer Nick Spencer and artist Luke Ross will team up for Secret Avengers, a new series coming from Marvel now in February. Based on the cover image at left, the series appears to cast Black Widow and Hawkeye as super-spies and series leads, heading up a team of S.H.I.E.L.D. agents that includes Nick Fury, Phil Coulson and Maria Hill. It also appears to open in Budapest, the scene of a conflict referenced in Marvel's The Avengers this summer, in which both Widow and Hawkeye took part. More information on this series should hit tomorrow at New York Comic Con or on the Marvel website.