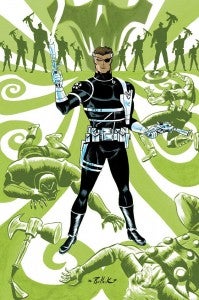 During an interview with Comic Book Resources, Marvel Comics Editor-in-Chief Axel Alonso laid down for the record exactly how the various character in Marvel Comics who go by the name "Nick Fury" work, promising that Nick Fury classic--the white guy with the graying temples--will always have a place in the Marvel Universe (right now, it's in Winter Soldier, apparently). Asked what to call Marcus Johnson, the original Nick Fury's illegitimate son who currently fills the role as the Marvel Universe's main Nick Fury and the director of S.H.I.E.L.D., a job conventionally associated with his old man, Alonso said, "I refer to him as 'Black Fury' because it sounds like a cool Blaxploitation flick. But around here, we haven't really settled on one moniker for him, maybe because the Nick Fury we grew up with -- the guy with the eye patch and graying temples -- is always going to have a place in the Marvel Universe. But Marcus Johnson figures big in the future of the Marvel Universe for sure." Of course, when the interviewer suggested that introducing Marcus--a younger, African-American character--was designed to make the movie audience more familiar with Samuel L. Jackson's Fury feel more at home, the editor soft-pedaled his response. This isn't, he says, the "Sam Jackson Fury." That character, after all, is in the Ultimate Universe, and was inspired by Jackson to begin with. "Marcus is not the Samuel L. Jackson Nick Fury. That guy exists already in the Ultimate Universe," Alonso explained. "He's a new character with a direct blood tie to classic Nick Fury and a role in the Marvel Universe that will come more into focus this year. Yes, his appearance will be friendly to those who gravitate toward the Sam Jackson Fury, but to me what's exciting is that we've got another African American power player in the Marvel Universe." It seems, of course, a little disingenuous to suggest it's "just a coincidence" that the new look Fury syncs up so nicely with the movie version--especially when he was introduced in a story that also introduced Phil Coulson to the Marvel Comics Universe. No word on what, exactly, the elder Fury is doing in the Ultimate Universe in an upcoming issue of Ultimate Comics Ultimates.