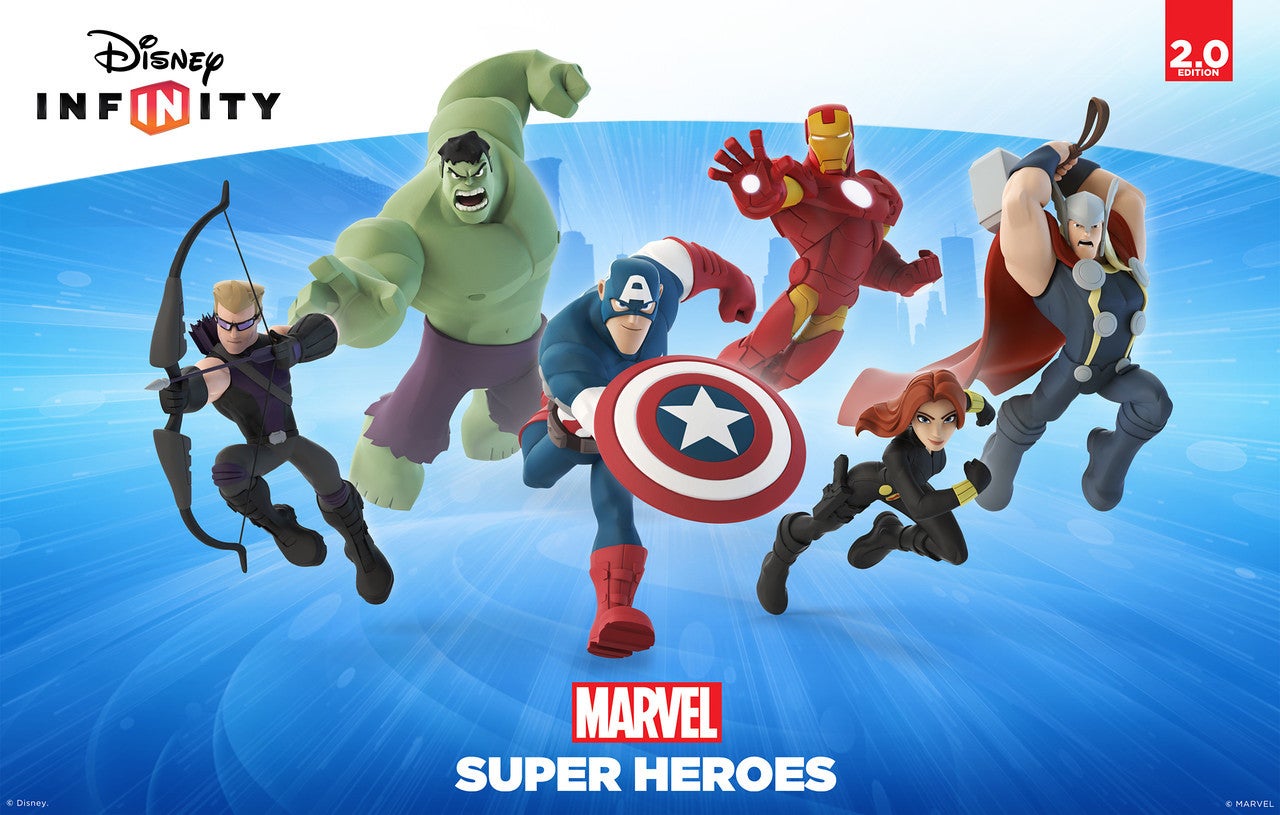 I don't know if you've ever been at a dinner party and the conversation turned to "If you could have any super power, which one would you have?"

I have. My gut reaction was to answer "The one where I can turn somebody's food to poison just by just looking at it" or "The ability to make boring people's heads explode all the way from the other end of the dinner table." The best answer, though, would be flight. The superpower of self-sustained flight is definitely the best. That's just about the number one thing I've learned from playing the hell out of Disney Infinity: Marvel Superheroes this last week. 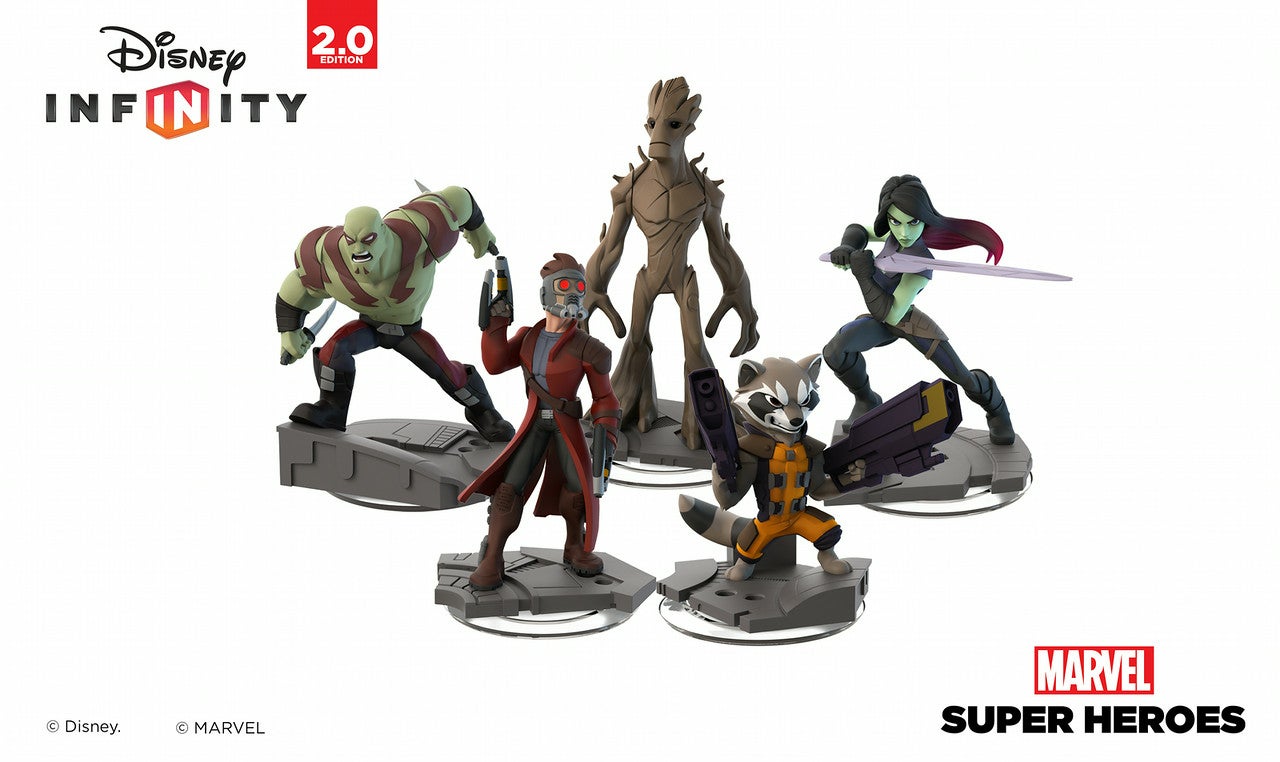 I don't know if you ever played the original Disney Infinity, but the central concept is a clever one. The game comes with a special USB-connected base that you plug into your console. This is where you stand the nifty little play figures that come with the game, or one of the extra ones you've purchased as an add-on, to bring that figure to life as a character in the game. There's a great little transition moment in which the figure is lit up on the base in sync with an on screen animation that really sells the idea that your toy is being brought to life on screen. That your progress, power-ups and skill upgrades are saved to your toy itself and not the console further enhances the idea that you're playing on-screen and in-game with the actually, vinyl collectible that you own.

With the Marvel Superheroes 2.0 edition, the game comes with three figures in the pack: Iron Man, Black Widow and Thor. You can play with any of these, or if there's two of you, any two of them. You can then also put down the "Avengers playset piece" and play in a full, Avengers-themed sandbox game, or you can take the characters into the hotly-touted Toy Box mode.

More on the Toy Box later, though, as I'm most drawn, I'll admit, to the playsets so let's talk about those first.

I played the Avengers set all the way through its main campaign and beat all of the various side missions that Iron Man, Black Widow and Thor can access. This took me just about nine hours. There's a story, if a pretty loose one. Don't expect a Last of Us style flowing narrative, but something more like a scattered series of missions you can pick up from the sandbox map and that sometimes, but not always, move the plot along. The game was co-written by Brian Michael Bendis, though it's not clear if all of the cut-scenes, missions, and dialogue come from his pen or he was just on the team. 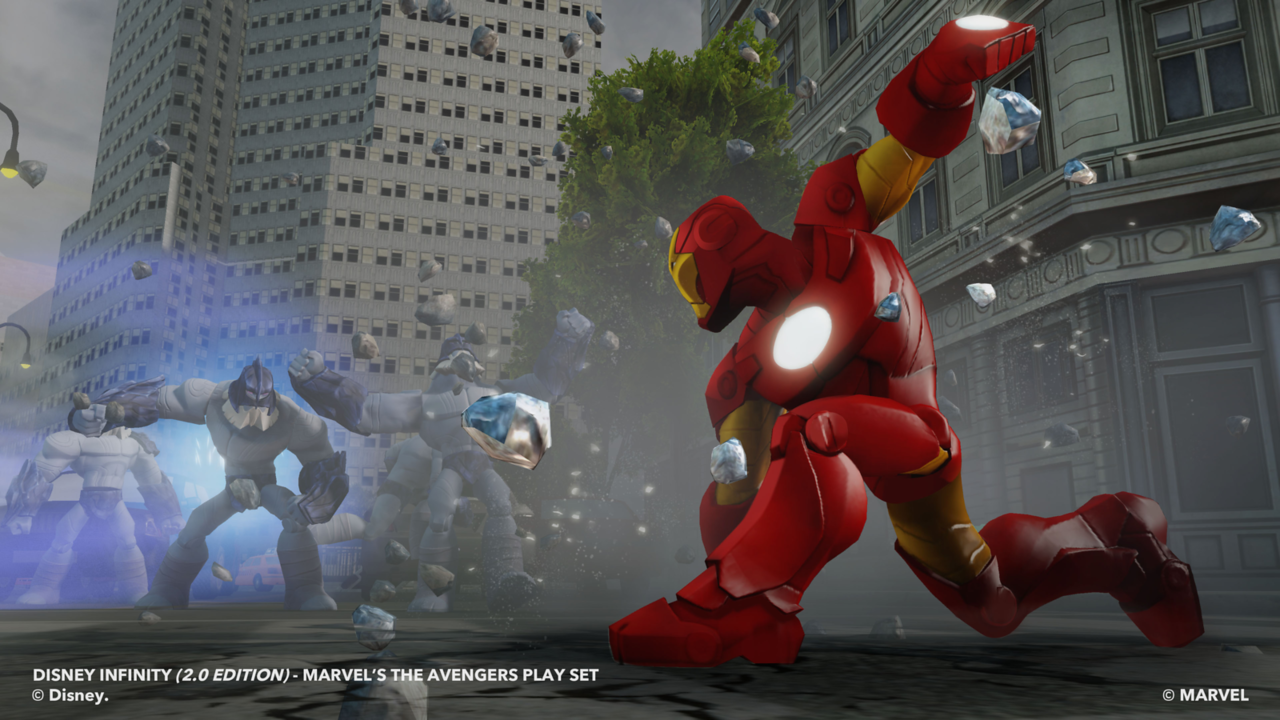 So, playing first of all as Iron Man I set about fighting my way out of the Avengers' tower against an onslaught of Frost Giants. It seems that Loki has brought them to Manhattan and plunged the city into deep freeze. The tower section is pretty tightly structured and works as a tutorial to the various moves that all of the characters have in common - jump, double jump, melee attacks, ranged attacks, pick up, carry and throw. It was outside, when the Manhattan map was wide open to me, that Iron Man's specific abilities became more directly useful.

Iron Man can fly, and so can Thor. If they want to cross the map in a hurry, they can. Black Widow, meanwhile, will have to hop into a motorbike, a car, a helicopter, or some other vehicle.

Comparing the three characters further, it became obvious that Thor was the heavy-duty brawler type and Black Widow was the nimble, zippy sort who could spread her attention across a big group of enemies quite fluidly. She can get knocked down pretty quickly, however.

As you play and gather experience points, in the form of glowing orange sparks, you can level up and upgrade your abilities on a branching skill tree. There's a 20-level cap so you can't possibly earn enough upgrades to get everything, so you have to choose if you want, for example, a faster Iron Man, or a more armoured one, one with more combat moves, and so on. Each character has their own arrangement of possible upgrades, which is fully in keeping with the game's sense of flexible customisation. It also underlines the idea that it's your figure in the game, not just any copy of that figure, as you'll be saving all of your new abilities and skill levels specifically to your own model. 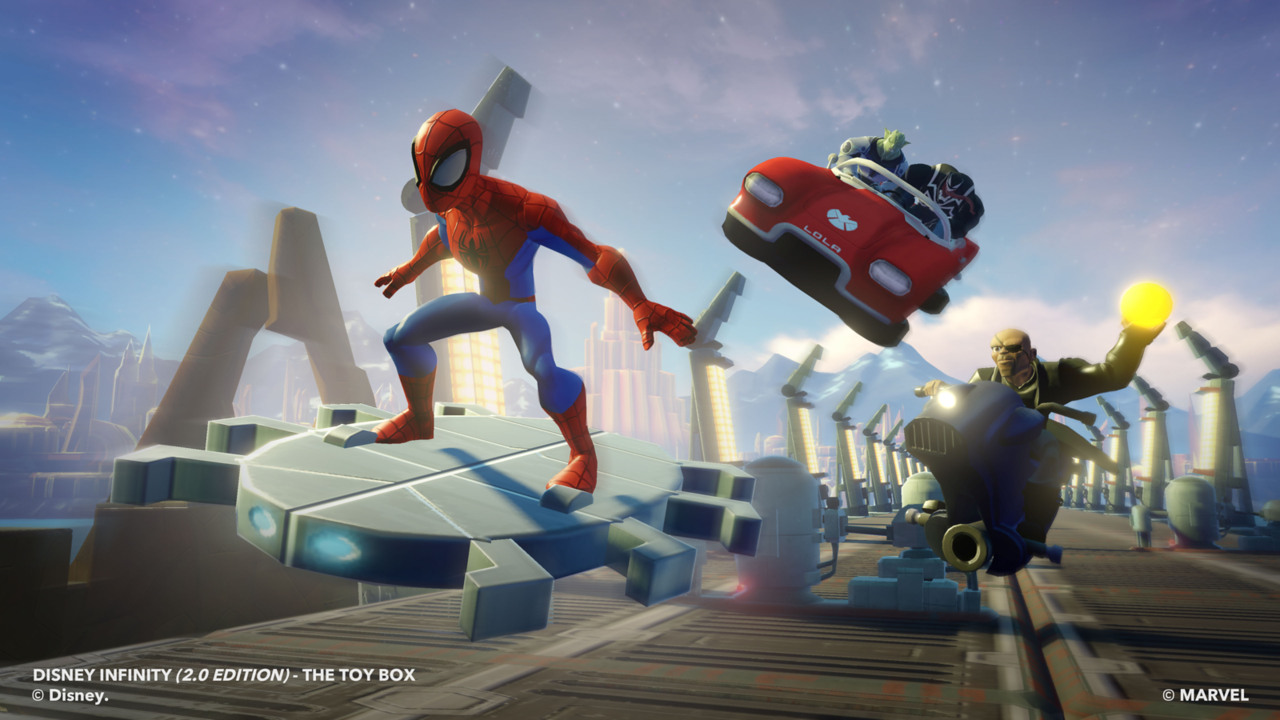 After completing the Avengers play set, I moved on to the Amazing Spider-Man one. The main map was another replica of Manhattan, though a notably different one with some important changes. This playset took me less time to clear out, and I'd completed the plot and side missions in about seven hours, leaving just random encounters and a great number of collectibles still scattered around if I ever want to just hop back in for the heck of it.

The plot missions in the Spidey set are much more varied and imaginative than the Avengers ones, not least because Mysterio is one of the villains. In fact, the game has enought nerve to use Mysterio as an excuse for its opening, training sections. They're really quite surreal. 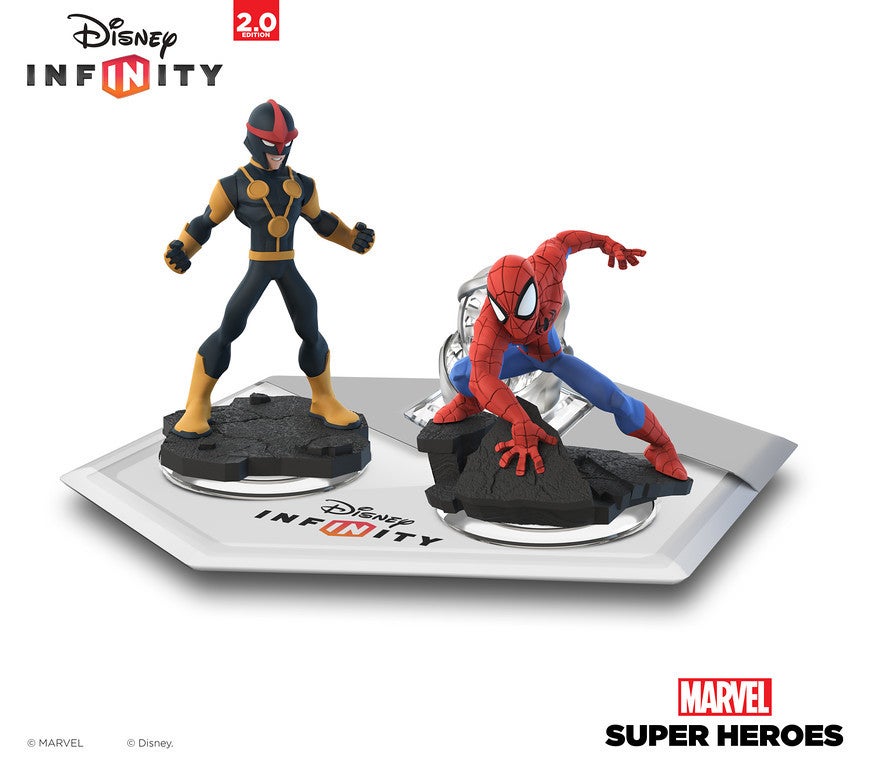 This playset comes with Spider-Man and Nova figures though it seemed only fair to play, at least mainly, as Spider-Man because it was his name in the title and The Green Goblin was the big bad. Thanks to the webbing abilities were very unlike any of the Avengers, which compounds how flexible and far-ranging the character classes and abilities in this game are. Venom can be purchased as a standalone figure too - I don't have him yet - and I dare say his abilities will be Spidey-ish, but also distinct in several ways too. It seems like the variety in the figures, and the moves and upgrades open to them, means that any given player's style and preferences could lead them to a certain preferred character.

In my case, that definitely became Nova. He was handy enough in hand-to-hand, had a pretty good range attack and, all-importantly, he could fly. 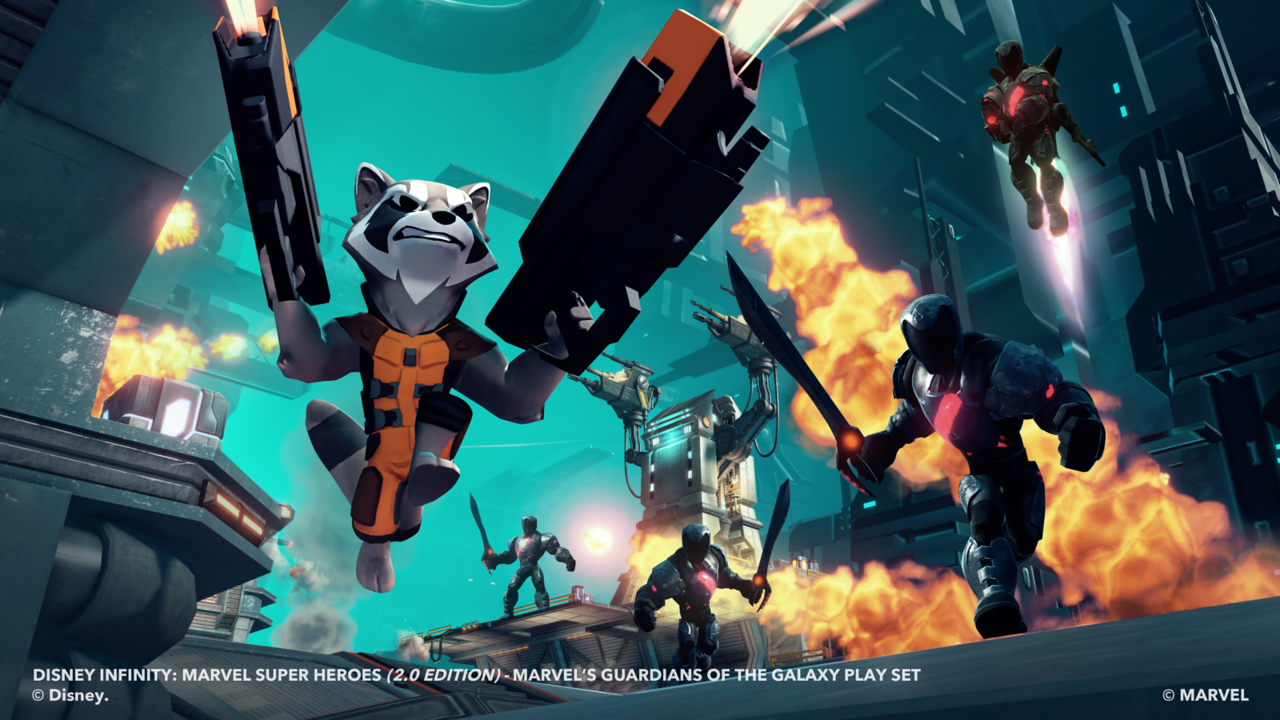 The Guardians of the Galaxy playset is the most obviously individual of the three. Not only is it set in Knowhere, rather than a big toy replica of New York, it's designed to be rather more 'ground level.' This was essential, I think, as neither of the figures packaged in this playset, Star Lord and Gamora, can fly. I felt that, at first. I'd become so accustomed to the freedom of being able to just lift myself off of the ground or rocket my way across the skyline.

Indeed, Star Lord doesn't have any superpowers at all, but he does have some great tech. I have upgraded him enough that his rocket boots are pretty powerful, he duel-wields souped-up element guns and he access to both mines and turrets that he can plant on the playing field to help take out his enemies. If I level him up some more, I should be able to unlock the Hadron gun from the movie.

I finished the Guardians playset too, in about six hours. As well as mopping up all side missions there, I also managed to find ten Iron Man "crossover" tokens hidden around the map. What these do is unlock Iron Man as a playable character for the Guardians playset. Putting my Iron Man figure down on the base triggered a cut scene and revealed some exclusive missions - about 20 or 30 minutes worth - that only this character could play.
Outside of the playsets, there's that Toy Box. The idea here is that users can create new levels of their own, and unlike with the first edition of the game, these can now have pretty well-defined, traditional level structures and objectives imposed upon them. It's amazing how much of an effect it's had that there can now be clear "win" and "lose" conditions set on Toy Box levels. What used to feel like wandering around aimlessly and a borderline Victorian approach to "making your own entertainment" is now closer to an actual game builder that can create experiences not entirely dissimilar to the developer-built play sets. 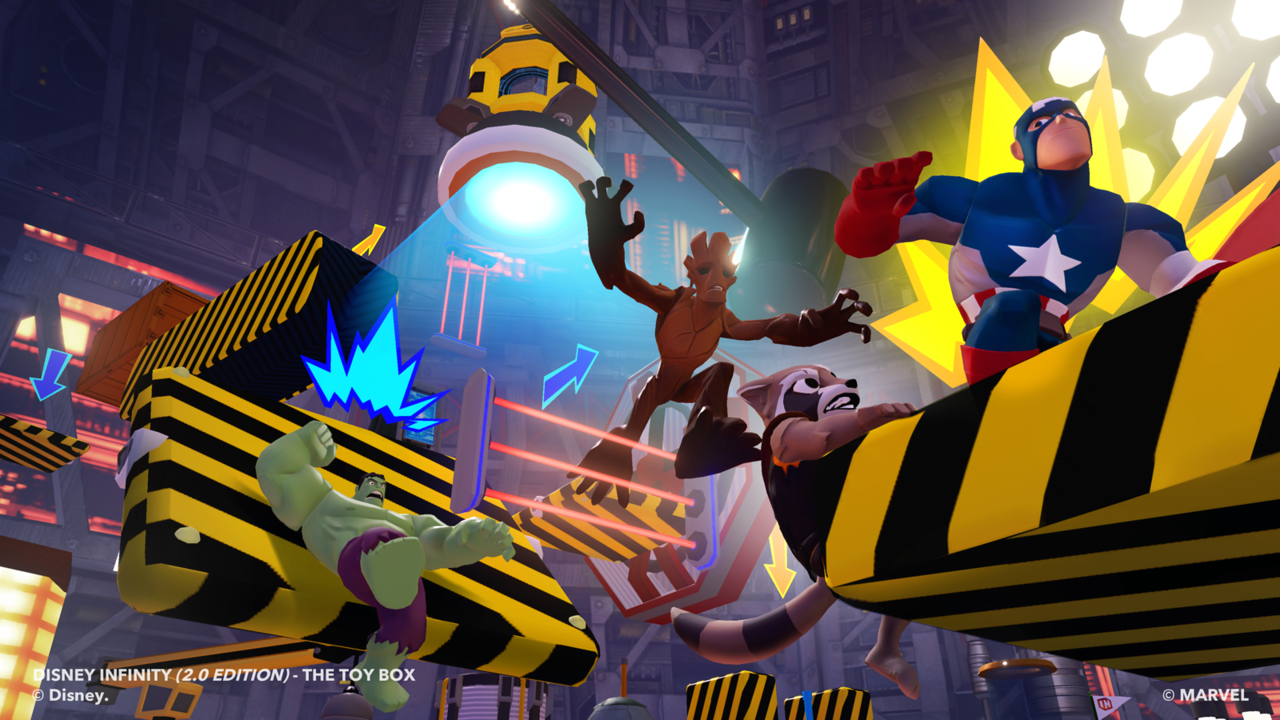 There's great variety of options in the Toy Box, and levels can range from sporting arenas and obstacle courses to race tracks, or from collect 'em up and target-hunting missions to something more puzzled-based. Disney will release new, free DLC that adds more, complete Toy Box levels on a weekly basis, and if the first batch are anything to judge by, they're enjoyable, ambitious and coherent in ways that the 1.0 versions were baggy, open ended and unsatisfying. The Toy Box has come on in leaps and bounds since the first release of Infinity.

The Toy Box is also where the barriers between Disney's fictional universes come down and instead of just playing Marvel characters in Marvel worlds, you can now toss a figure of Sulley from Monsters Inc., or The Lone Ranger, or one of Pixar's Cars or Mickey Mouse onto your Infinity base and bring them into the game.

This can result in all out war between a living, virtual toy of Donald Duck, armed with a frying pan and a mean speech impediment, and Captain Jack Sparrow, wielding a flint-lock pistol and swaggering about like a man whose blood is made out of rum. All of the various figures so far released, including all 29 from the first game and the 15+ Marvel ones on shelves from launch, can be brought together.

If you want to build your own Toy Box levels, there are many virtual pieces available to you right away and many more can be purchased using a blue spark currency that's very easy to come by in the game. It didn't take me much effort at all to build a big library of various pieces. The most important ones, perhaps, are the "Creativi-toys," which are logic devices. These give the game object-based programming capabilities and should be able to power some quite sophisticated gameplay ideas even in amateur, user generated content.
Marvel have blended into the Disney Infinity line pretty smoothly, and while it could be argued that other, non-Marvel characters and worlds have received short shrift as a result, 2.0 does make sure to add value to your old 1.0 Disney figures by giving them upgradable skill trees too. I put my Mr. Incredible on the base, for example, and found that he was sufficiently levelled up that I could now really over-crank his powers. He's super-tough now and, really, if your Tinkerbell figure ever sees him come running at her across a multiplayer Toy Box, she'd do well to fly out of the way.

This time next year, it has been heavily hinted to the point of near-confirmation, the 3.0 edition of the game will introduce Star Wars to the mix. I hope they also find space for some more Marvel too - Daredevil, in particular, seems like a character with massive potential. Surely Brad Bird's Tomorrowland needs to be mixed in at some point too, if only for all the retro, 50s-styled sci-fi fun it will bring.

Disney Infinity 2.0 is an excellent step up from the already charming first edition, and with the addition of Marvel characters and a reinvigorated Toy Box mode, I think I'm going to keep coming back to this one for new characters, new unlocks and all of that free DLC pretty regularly. 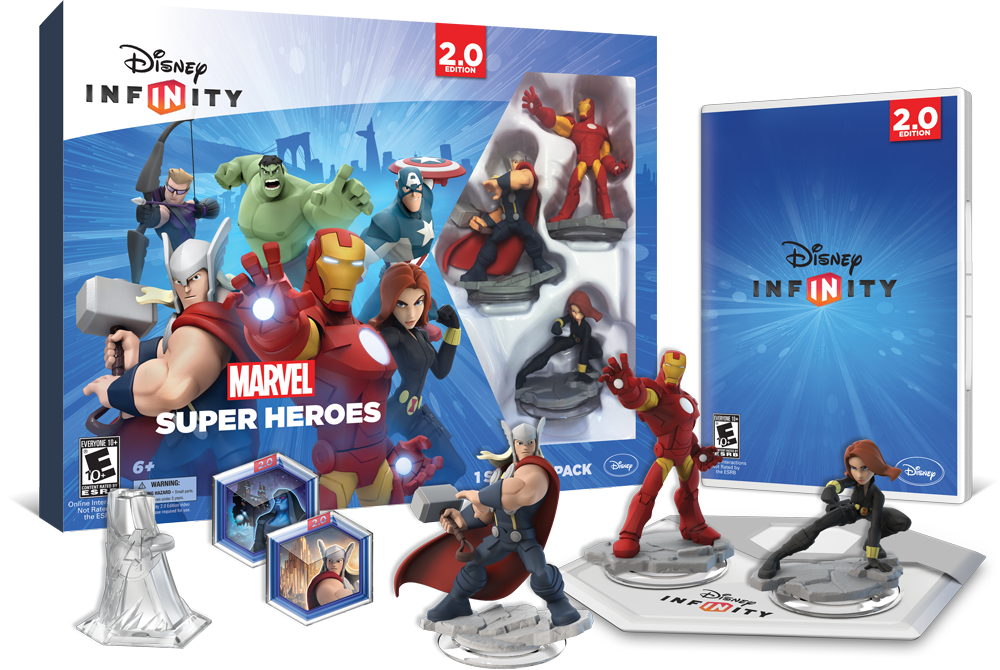 REVIEW: Disney Infinity 2.0 - "I’m going to keep coming back to this one"