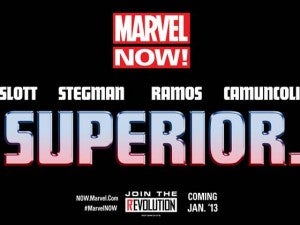 Marvel Comics unveiled yet another Marvel NOW! teaser today--and this one's a duplicate of a previous teaser! Well, not exactly. This time around, their "superior" teaser has creator names attached to it, although the involvement of Amazing Spider-Man writer Dan Slott has been speculated since the first teaser went live. Slott's name appears alongside artists Ryan Stegman, Humberto Ramos and Giuseppe Camuncoli in the teaser, which promises a new title with a 2013 release date. That's the month after The Amazing Spider-Man #700, the final issue of the long-running series. If Marvel should decide to do a twice-monthly or even weekly Spider-Man series, it wouldn't be the first time Slott has worked more than monthly on the character; he was part of the initial Amazing Spider-Man dream team that kicked off following the controversial One More Day storyline and has been consistently at least twice monthly since. Of course, there's no guarantee that it's Spider-Man. While pretty much everybody assumes that's what's coming, Slott himself tweeted an alternative: "I'd like to thank Marvel for their faith inRyanStegman humberto_ramosGiuseppe Camuncoli's & my new SUPERIOR SQUIRREL GIRL series!"