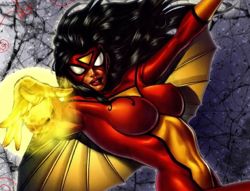 The pulling of hair, gnashing of teeth and banging of heads against rocks have probably been common expressions of frustration from fans, writers, producers and studio heads over the on and off again Wonder Woman feature film. For various reasons, DC has had a devil of a time getting a movie about its premiere female superhero off the ground. Fans of the Greek heroine will have to make due, for now, with the fantastic animated feature, voiced by Felicity herself, Keri Russell.

While this live-action project languishes on the vine, Marvel is perhaps missing an opportunity by focusing solely on its more traditional male heroes. Maybe still feeling the burn of failure from Elektra, which shouldn't have been made in the first place (thanks Daredevil), Marvel has stuck to its upper-tier characters, such as Wolverine and Spider-Man, guaranteed cash cows and franchise characters.

Now is the perfect time to begin thinking about throwing a little love to the ladies of Marvel. We've seen Sue Storm in the Fantastic Four film series, but what about a solo venture? One character that seems perfectly suited for that outing would be none other than Jessica Drew herself, the original Spider-Woman.

Spider-Woman's origin has some wonderful possibilities. Consider the story of young Jessica Drew, daughter of scientist Dr. Jonathan Drew, who is poisoned by radiation as a young girl, but saved with a serum made from mutated spider's blood, courtesy of her father, a scientist. In the traditional comics origin, Jessica would go on to battle Nick Fury and SHIELD as a brainwashed agent for the terrorist agency HYDRA after growing up in the bizarre land of genetic experimentation, Wundagore.

Eventually she came to her senses and began a career as a private investigator and costumed hero, determined to make up for the damage she had caused as a Hydra agent. Consider the potential for cameos and characters making an early appearance in a film with this as a beginning point. What level of special guests could be smartly implemented into the story of a young European girl trying to break free of an international organization devoted to mayhem and death?

Even though her original origin was slightly altered by the recent limited series Spider-Woman: Origin, the espionage angle could be fully utilized and incorporated into a story about Jessica's evolution into Spider-Woman. Although many of her rogue's gallery are not as well known as other heroes', there is no shortage of characters to choose from that would pose a threat to our raven-haired heroine in a film adaptation.

Weaving in a villain such as Brothers Grimm or Hangman could easily connect to the film's spy themes and elements, as a little bending of traditional origin stories is expected to make a movie adaptation of comic book origins. These two villains represented a murderous and recurring aspect of Spider-Woman's solo adventures, and they would be well represented in a film version of her story, perhaps even connected to HYDRA in some way to add continuity to the film plot. Think of the villains as a lackey or henchman of Madame Hydra, the main villain of the piece.

Perhaps the plot could focus on her discovering more and more of her powers as she struggles to finally break free of HYDRA's grip over her life, much like what she's done in the traditional comic book story. Consider also the potential for sequels, especially involving other major Marvel characters, much like the cameos hinting at the formation of a "special group" that have popped up at the end of several Marvel movies lately. *ahem, New Avengers*. What adventures and spectacular feats could she get into next, and could her day job as a PI be a factor in any future stories? Her original base of San Francisco would also be an interesting change of scene from New York, where most Marvel films tend to start.

There's also no shortage of stunning women would could possibly play Jessica Drew. Perhaps Eliza Dushku, who's no stranger to the sci-fi and comic genre. Maybe Emily Blunt? Would an unknown actress be a better pick for this role? Would Jennifer Garner be off limits because of the mess made with Elektra? Great questions all, but certainly that would be an added benefit to a quality film. Physical appeal worked with getting some women to X-Men Origins: Wolverine, so why not have the same possibly happen with men with a Spider-Woman film? One woman's shirtless Hugh Jackman is another man's spandex-clad Angelina.

DC's problematic Wonder Woman venture could be Marvel's gain, if only Marvel could find an effective way to capitalize upon it. Spider-Woman may be their best bet. She has a distinctive, rich history and promises enough super-powered action to make the film a great ride for viewers. Add in elements of HYDRA and SHIELD and it's a globe-trotting extravaganza! Now…just the one little detail of finding a writer.

Spider-Woman Zaps Into Theaters? Make It So Marvel!

Guardians of the Galaxy Vol. 3 Director James Gunn Praises Cast: "All Gave It Everything They Had"