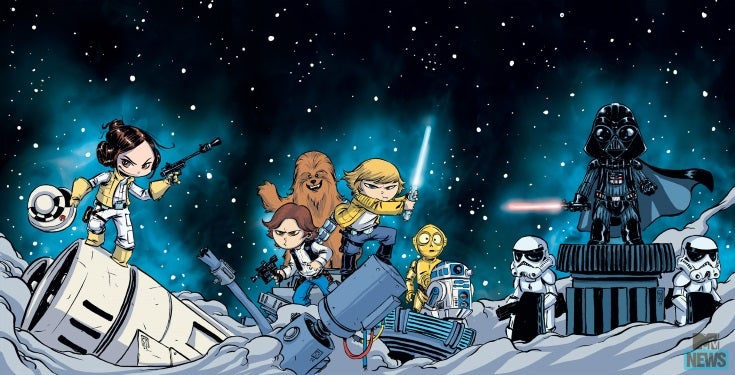 Marvel Comics has released a series of three interlocking covers for their new line of Star Wars comics, each drawn by Skottie Young (via MTV).

Drawn in Young's signature style, the covers will be released as variants for Star Wars #1, Star Wars: Darth Vader #1, and Star Wars: Princess Leia #1 when they are released early next year.

"Like most people my age, I spent a good part of my childhood playing with 'Star Wars' toys for hours on end," Young said in a statement from Marvel. "I cried like a baby when I realized I left my wampa figure on the radiator and his leg melted half off.

"Flash forward years later and I get to be a little (pun absolutely intended) part of the 'Star Wars' universe by creating my take on these covers. It's surreal. Also, I've shared that wampa story before and fans actually bring me wampa figures to cons. THIS IS MY LIFE!"

Star Wars #1 goes on sale in January, with Darth Vader #1 following in February, and Princess Leia #1 coming in March.