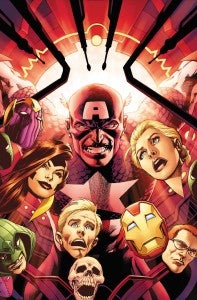 , recently relaunched and written by longtime scribe Ed Brubaker, will see its first creative change in December when artist Steve McNiven leaves the title and is replaced by Alan Davis, Bleeding Cool reports. The report is unsourced but reads like official text, citing Alan Davis as an "A-list" talent capable of filling McNiven's shoes. Davis, whose work includes 2000 AD, Captain Britain and Justice League: The Nail, is a fan-favorite with a dynamic and fluid visual sense and great facial expressions. His most recent work was DC RetroActive: Batman - The '80s in August and Marvel's Fear Itself: Fellowship of Fear. There's apparent confirmation of the change in Marvel's December solicitations at Comic Book Resources, where Davis is listed as the sole artist on Captain America #6, and the solicitation text describes him as "join[ing] the all-star creative team." That doesn't sound like a total departure for McNiven to me, though; don't be surprised if the star Civil War artist's incredibly detailed art style simply can't be kept up on a month-in, month-out basis and he will work on Captain America as schedules determine it to be possible. While the solicitation teases a connection to Fear Itself, it's impossible at this point to know whether, or how directly, Davis's Fellowship of Fear miniseries will play into the story.

Steve McNiven Off, Alan Davis on Captain America with December's #6